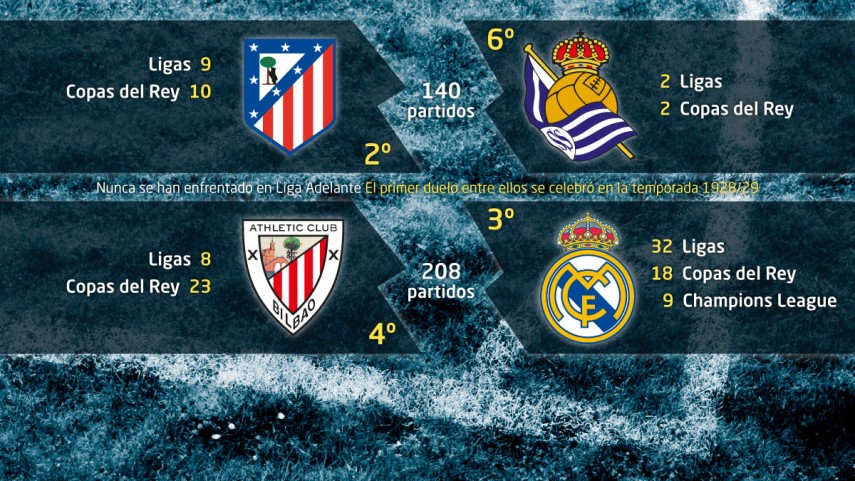 A romantic weekend for four

The double header between Atlético-Real Sociedad and Athletic-Real Madrid offers an interesting Basque-Madrid double between four of the Liga BBVA's historic clubs.

Liga BBVA matchday 22 has thrown up the exciting prospect of two clashes between teams from the Basque Country and Madrid, it is one the romantics are sure to have circled in red on their calendars. Club Atlético de Madrid, Real Sociedad de Fútbol, Athletic Club and Real Madrid CF all come into the match in fine fettle and in their respective fights for Europe and the Liga BBVA.

You have to go back to the 1928/29 season to find their first clashes, when the Spanish championship was established in the turbulent 20s. That season, the four clubs played their first official matches as Liga BBVA teams, bagging nearly ten goals between them: 0-3 in the Atlético-Real Sociedad tie and 5-1 in the Athletic-Real Madrid game. Now, 83 seasons later, all four clubs continue to delight the public and rouse the fans with their wonder-goals and some world-class football.

The clubs from Bilbao and Donostia are direct rivals in the fight for European spots this season. Fourth place is a high prize for both of them and in order to stay in the thick of it they need to defeat the teams from the capital, who are in the battle for the Liga BBVA title with FC Barcelona.

The two clashes that have been graced by legends such as Luis Arconada, José Gárate, José Ángel Iribar and Paco Gento, and now include some of the stars of planet football, promise to be high-class games with an air of history, mystique and grandeur. This time it will be Carlos Vela, Diego Costa, Iker Muniain and Cristiano Ronaldo and company who are responsible for putting on a show in this historic clash between the Basque Country and the capital.