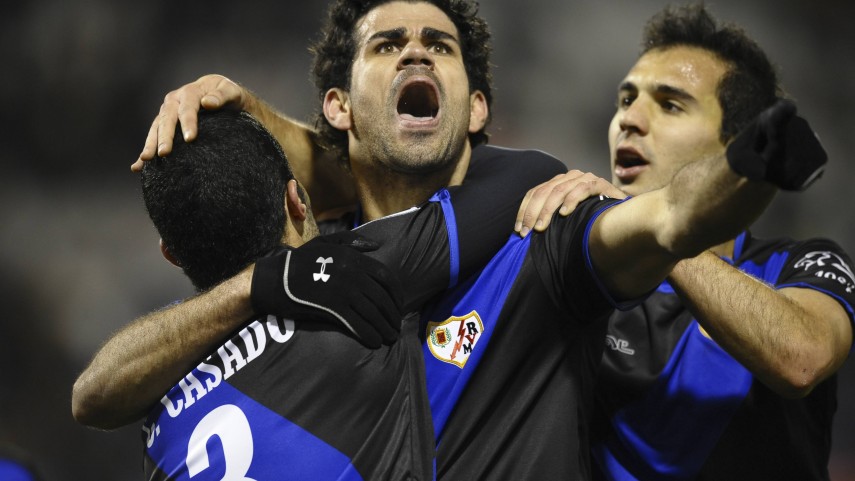 A Rayo of light in Costa's career

The Atlético striker made his name in the Liga BBVA during a half-season spell on loan to Rayo Vallecano.

So far, the 2013/14 season has confirmed Diego Costa as one of the stars of the Liga BBVA. The Club Atlético de Madrid striker has racked up some spectacular stats and he has had a decisive influence on his team's great first half of the season. But the truth is that the Spanish-Brazilian's breakthrough, unlike that of others players, has not been so sudden, rather it is his payback for several seasons of hard work.

Costa was signed at just 19 years of age by Atlético, when he was a complete unknown to the fans of Spanish football. In his first two seasons he played in the Liga Adelante on loan to RC Celta de Vigo and Albacete Balompié, and in 2009/10 he finally reached the Spanish top-flight when he was loaned to Real Valladolid CF. But he did not start turning heads until the 2011/12 season, when he proved himself on loan to José Ramón Sandoval's Rayo Vallecano having spent most of a season on the bench in the shadow of Sergio Agüero and Diego Forlán at Atlético.

In the summer of 2011 Atlético's management team had to discard a non-European in order to complete their squad. The choice was between Diego Costa and Eduardo Salvio, and an untimely knee injury for the Spanish-Brazilian led them to select the Argentinian. But Costa did not give up hope. He recovered for the second half of the season and scored 10 goals in 16 Liga BBVA matches for Rayo, where he formed a deadly duo with Michu. His games against Real Madrid CF in Vallecas and Real Zaragoza, where he scored his first goal, have gone down in Rayo's history books.

Rayo comfortably stayed up, Salvio made his way to SL Benfica in the summer and Diego Pablo Simeone opted for Diego Costa to complement Radamel Falcao in attack. The rojiblancos striker shone in 2012/13 to become one of the stars of the Liga BBVA.