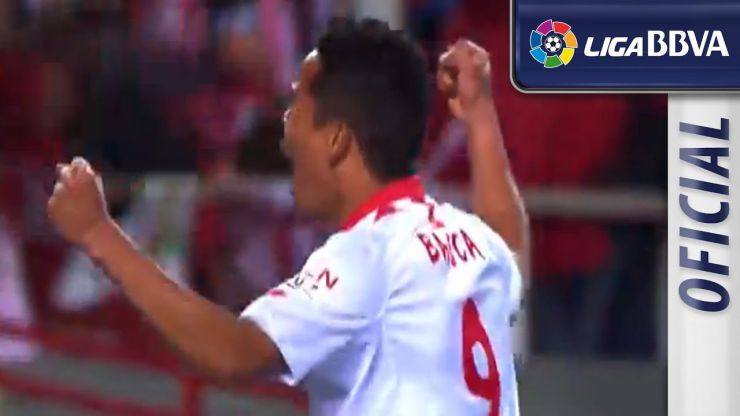 A magic night for Sevilla

The Andalusian side beat Real Madrid 2-1 with two goals from Carlos Bacca and has solidified its fifth place after six wins on the trot.

Sevilla FC had a magical and unforgettable night as they beat Real Madrid CF 2-1 on matchday 30 of the Liga BBVA. Thanks to two goals from Carlos Bacca, one in each half, the side from Seville came back to record its sixth consecutive victory and strengthen its fifth position in the table. The Whites, on the other hand, were unable to make up for their Clásico loss to FC Barcelona and are now in third position, three points behind the leader, Club Atlético de Madrid.

The fans in the Ramón Sánchez Pizjuán produced an unbeatable atmosphere as they threw themselves behind their team and they were not disappointed. After two great chances from Karim Benzema early on, both of which were dealt with by home keeper Beto, the Whites took the lead after 14 minutes with a free-kick from Cristiano Ronaldo. The Portuguese player’s shot ended up in the back of the net having taken a deflection off Carlos Bacca but the Colombian striker made up for it four minutes later as he levelled the match after a spectacular counter-attack.

Real Madrid were intent on regaining their lead in the second half, but Bacca rounded off a great performance by making it 2-1 in the 72nd minute, after receiving a sublime pass from Ivan Rakitić. Despite the fact that Carlo Ancelotti’s men fought until the last minute to turn the match around, Sevilla managed to defend their lead.