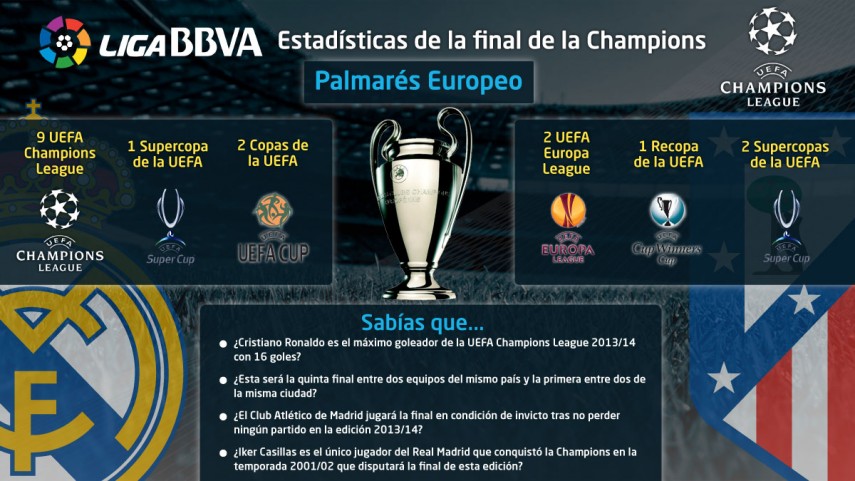 A look at the stats for the Champions League final

Real Madrid and Atlético will be bidding to conquer Europe when they meet in the final in Lisbon.

Real Madrid CF and Club Atlético de Madrid will be in the spotlight of world football when they meet in the final of the UEFA Champions League. All great clashes bring with them countless interesting statistics, and this one is no different. The Estádio do Sport Lisboa e Benfica will provide the stage for a match between two of the biggest clubs in Spanish football, and both have already celebrated titles this season.

Did you know...? For the first time in its 59-year history, the final will be played between two teams from the same city

Did you know...?  Real Madrid CF has scored 30 goals in the twelve finals it has played

With the seven goals scored in one match by Ferenc Puskás and Alfredo Di Stéfano, and more from Raúl González and Predrag Mijatović, the Whites have forged their place in the history of the competition with nine titles thanks to their goalscoring prowess in their finals. The 'Blonde Arrow' and the Hungarian player are the most prolific in the round, with 14 of those goals to their name, seven apiece.

The Rojiblancos will be playing in their second ever UEFA Champions League final. Their last appearance in the final of Europe’s top competition was against FC Bayern München in the 1973/74 season. That year, the champion was decided in a rematch as they drew one-all in their first meeting.

Did you know...? Cristiano Ronaldo, David Villa, Xabi Alonso and Iker Casillas are the only players who have already won the UEFA Champions League

The Portuguese player’s only Champions League title came with Manchester United FC in the 2007/08 season against Chelsea FC, when Cristiano scored the equaliser. David Villa won when FC Barcelona beat Manchester in the Wembley final, a match in which he bagged his side’s third goal. The player from Tolosa was part of Liverpool FC’s epic comeback against AC Milan in the 2004/05 season. For his part, Casillas is the only member of the team that won the 2001/02 Champions League who is still playing.

Did you know...? Both teams have won a European final against a Spanish club

Real Madrid won 3-0 in the 1999/00 Champions League final against Valencia CF thanks to goals from Fernando Morientes, Steve McManaman and Raúl González while Atlético did the same against Athletic Club, with the same result, in the 2011/12 UEFA Europa League, led by Radamel Falcao, who scored a brace, and Diego Ribas.