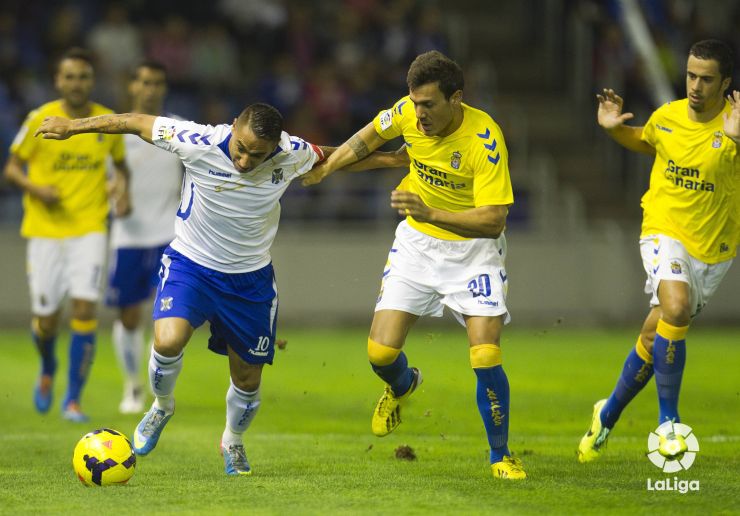 A Liga Adelante with a Canary twist

Tenerife and Las Palmas are within a point’s reach of each other and are both fighting for a promotion play-off place.

With the passing of each matchday of the 2013/14 Liga Adelante season, there is no doubt that this is one of the most tightly contested campaigns of the last few years. So much so in fact that there are three teams level on points at the top of the league. However, this season has seen the re-emergence of two of the division's historic teams, both of which are in the fight for the promotion play-off places: Las Palmas and Tenerife.

Between them they have spent a total of 62 seasons in the competition and this campaign is made even more special as it is Tenerife's first back in the division since spending two years in the Segunda División B (the Third Division). Despite just coming up, Álvaro Cervera's men have been in excellent form during their return to the Liga Adelante, where they lie in ninth place, just one point off their local rivals.

But if Canary Island football is being well represented by the team from Santa Cruz de Tenerife, then Las Palmas also deserves a mention. The Yellows have also been delighting fans and sit sixth in the league with 38 points, eight away from the automatic promotion spots. Both sides can realistically dream of promotion to the Liga BBVA for next season.

The progression of the two clubs during the first 27 matchdays of the competition has been very similar. They have each racked up ten victories and are only separated on the number of draws they have clocked up, with Las Palmas edging it with eight. The last time these teams were so evenly matched in the league was eleven years ago, when they spent the whole season battling it out for promotion, something neither side achieved.

During the 2002/03 season, Tenerife, sat in fifth place at this stage of the season with 39 points. Meanwhile, Josu Uribe's team were in seventh place, with the same amount of points held by Sergio Lobera's men today.

This is not the first time the two Canary Island sides have been the centres of attention over the course of a Liga Adelante season. During the 99/00 campaign, the year Las Palmas were promoted to the Liga BBVA, the two sides occupied one of the top three spots for most of the season, which ended with the Yellows winning their last league title in the division.