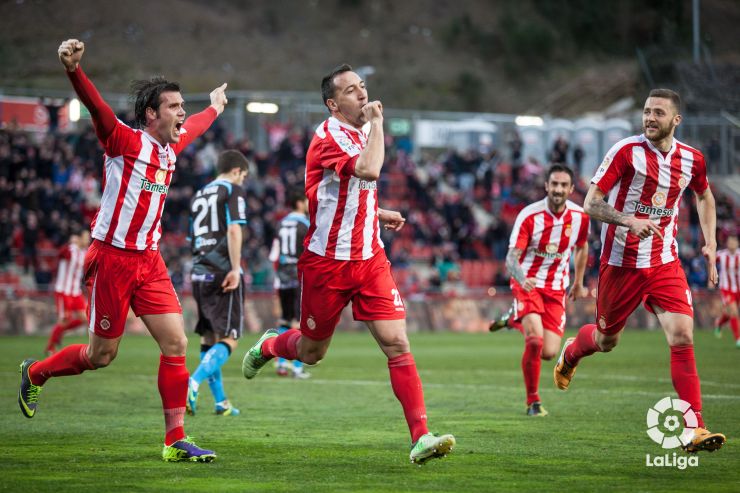 Girona beat Lugo 6-0 to equal their best ever result from the1957/58 season in the Liga Adelante.

En route to the stadium, Girona CF fans could not have imagined the magical afternoon that awaited them in the Municipal de Montilivi. Their team were reacquainted with victory in the best way possible. The Catalan outfit sealed an overwhelming win against CD Lugo (6-0) on matchday 26 of the Liga Adelante, leaving their twelve-match winless streak firmly in the past.

Six men played their part in the feat that will live on in the memories of the club. Alfredo Ortuño and Miguel Ángel González 'Migue' opened the floodgates before the break, but the best was yet to come, as Iván López, Gerard Bordas and David Timor joined the party with goals of their own. The Galician outfit's defender, Manuel Pavón, scored an own goal to round off the 6-0 rout.

The victory equals Girona's best ever in the Liga Adelante. To find another 6-0 you have to go as far back as 1957/58, when the Catalan outfit recorded its biggest winning margin against Real Avilés CF, who currently play in the Segunda División B. In addition, it equals the result produced by SD Eibar, the competition's current leader, against Real Madrid Castilla on matchday 14.

All this means that the team from Girona have escaped its rut of twelve matches without a win, including eight draws, six of them in the previous six matches, and four defeats. Their last victory came on the 10th of November, when Javi López's team beat CD Mirandés 1-2.

On Saturday Girona will found out if their astounding result was a flash in the pan. The team will need to collect three points from UD Las Palmas in order to escape the relegation zone and start believing they can still stay up.