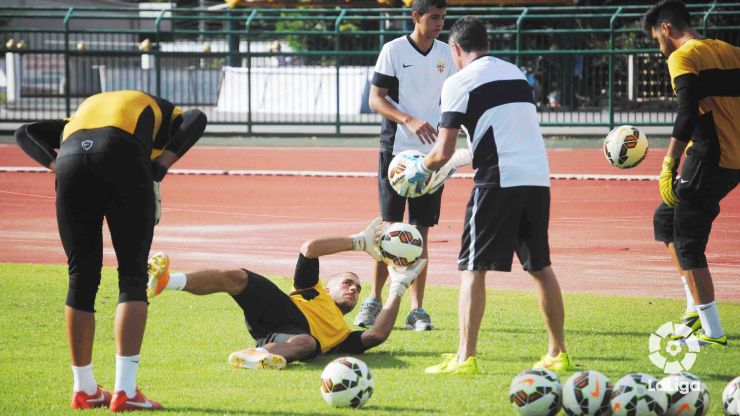 A great spirit of sportsmanship between UD Almería and Phuket FC

The two sides will face each other tomorrow 6 August at 14:00 CET for the Andalusian team’s final match in Thailand as part of the LFP World Challenge Tour.

UD Almería got the eve of their match against Phuket FC started with a morning training session in order to prepare for their last game in Thailand as part of the LFP World Challenge Tour. The Andalusians worked hard on fitness during a training session in which the Southeast Asian heat featured heavily.

In front of a large and attentive press pack, the press conference ahead of the match against Phuket FC was presided over by Alfonso García, the UD Almería president; the manager, Francisco Rodríguez; Teerasil Dangda, the Spanish side’s Thai player; Maitri Intusut, the governor of Phuket, and Pramookpisitt Achariyachai, the Phuket FC president.

Alfonso García began by thanking the people of Thailand for the reception the club has received since arriving on the Asian island. "It is a great honour for UD Almería and the Liga de Fútbol Profesional to be able to represent Spanish football with this 12-day long pre-season tour. As the days go by, we are adapting to the climate, the food and the people. It has been a great experience", declared the president of the Andalusian outfit.

Following that, Francisco discussed Wednesday’s game (6 August, 14:00 CET) between UD Almería and Phuket FC in the Surakul Stadium: "We will approach this game differently to the one in Bangkok. Phuket FC is a more humble club, however, we are eager to put on a good show. We also want the fans to enjoy watching Teerasil play in what will be our last match on our tour of Thailand".

As well as that, the governor of Phuket stated that, "people are really excited about UD Almería’s arrival in Phuket". "Thai people want to see Spanish football up close. The aim of this friendly is to get a better understanding of international sport", he concluded.

Meanwhile, the Phuket FC president was full of thanks for UD Almería for traveling to the island. "UD Almería has exposed the island of Phuket to the world and now a lot of international teams will know our football club", declared Achariyachai.

After the press conference, the governor of Phuket joined both club presidents to exchange gifts during a ceremony full of sportsmanship between the two clubs. A great atmosphere leading up to the match, which you can watch live on La Liga TV, free and without any geographical restrictions.