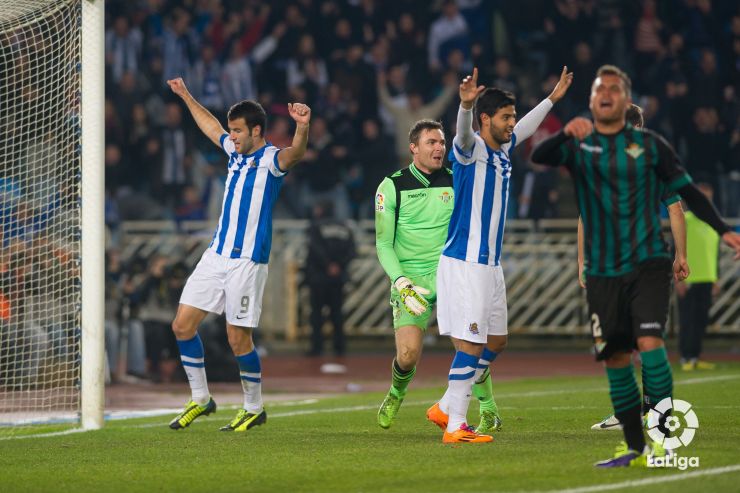 A good Sunday’s work for Real and Atlético

The Basque and Madrid sides won their home fixtures convincingly, with the former climbing the table while the latter holds onto its joint first place position atop the league.

Sunday’s encounters, which drew a curtain on matchday 16 of the Liga BBVA, ended with a resounding 3-0 victory for Atlético Madrid over Valencia, a win which sees the Red and Whites stay level on points with Barcelona on top of the league. Anoeta enjoyed a goal fest as Real Sociedad hammered Real Betis Balompié to continue the home side’s rise up the table, while Athletic Club managed to pick up a valuable point from a tough away trip to play Sevilla FC.

The day’s action kicked off with a goalless draw between UD Almería and RCD Espanyol. During a high tempo first half Espanyol had the best of the chances but in the end Almería hung on for a draw to earn an important point as it looks to move away from the relegation zone.

Later in the afternoon Real Sociedad made the most of home advantage by destroying Betis 5-1. Imanol Agirretxe put the Basques ahead but Jorge Molina levelled matters just before half time. After the break there were more goals for the San Sebastian outfit from Jon Ansotegui, Antoine Griezmann, Agirretxe and Xabi Prieto.

Sevilla and Athletic fought out a very even encounter in the Ramón Sánchez-Pizjuán. Alberto Moreno and Markel Susaeta both scored not long after kick off, and the two teams remained level for the rest of the match. Beto pulled off a magnificent save to deny Susaeta from scoring a winner from the penalty spot just before the break.

The day came to a close in the Vicente Calderón as Atlético took on Valencia, with the visitors playing well in the first half only to crumble in the second. A Diego Costa brace and a Raúl García goal ensured the Madrid side remains joint top with Barcelona.