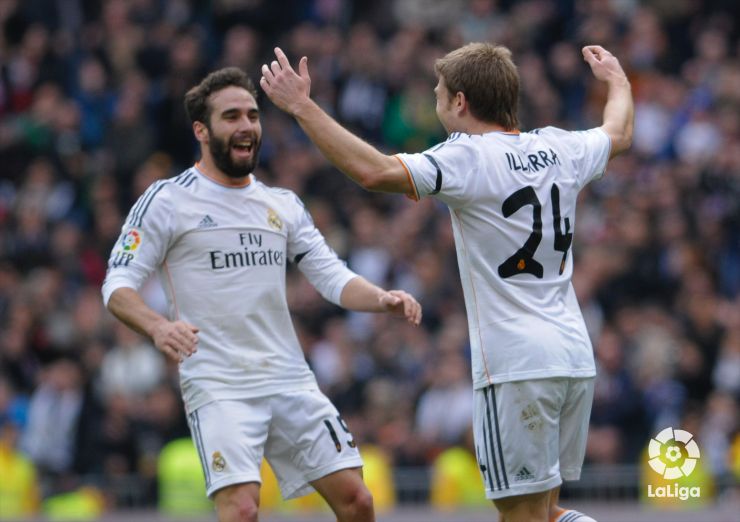 A good day for Real Madrid and Real Sociedad

The win against Elche and the defeat suffered by Barcelona in Anoeta help move Ancelotti’s men into first place, with Atlético still to play in Pamplona.

Real Sociedad made things even juicer at the top of the league on Saturday. The Basques’ victory against Barcelona knocked the Catalans off the top spot, which for the time being is being occupied by Real Madrid, with Atlético Madrid still to play in El Sadar on Sunday. An Alex Song own goal as well as strikes from Antoine Griezmann and David Zurutuza cost Gerardo Martino’s side first place in the league.

Saturday’s action kicked off with plenty of goals. Real Madrid beat Elche 3-0 to move into first place in the Liga BBVA. Asier Illarramendi, Gareth Bale and Isco were all on target for the Whites as they condemned the Alicante side to a defeat that moves them dangerously close to the relegation zone.

Matchday 25 of the Liga BBVA began with a stale mate in the José Zorrilla Stadium between Real Valladolid and Levante. The draw means that Valladolid will remain in the drop zone for the rest of the week, while the Valencian outfit continues to climb up the table. There was a similar outcome in Balaídos on Saturday as Celta Vigo held Getafe to a draw thanks to an equaliser from Rafinha that cancelled out Ángel Lafita’s earlier goal.

The curtain was drawn on Saturday’s action in the Estadio de los Juegos Mediterráneos in a match between Almería and Málaga. Neither side was able to find the back of the net and the match ended scoreless, a result that means both teams move further away from the Liga BBVA relegation zone.