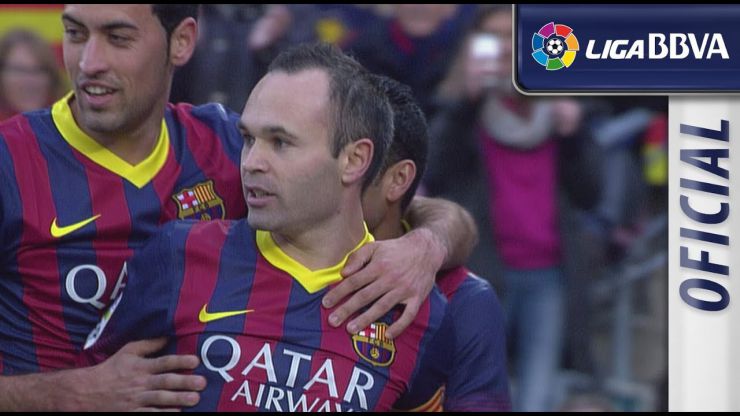 A goal fest in the Camp Nou

Goals by Iniesta and Fàbregas, both from the penalty spot, as well as efforts from Alexis and Pedro gave the Catalans a comfortable victory.

Barcelona beat Granada CF 4-0 in Saturday’s opening Liga BBVA matchday 14 fixture. The home side extends its lead atop the league table, while, despite losing, the Andalusians remain relatively untroubled in mid-table.

A Barcelona team not featuring Lionel Messi, who showed off his recent Golden Boot award to the fans, dominated the first half and made things very difficult for the visitors. Dimitri Foulquier took Cesc Fàbregas down in the box and Andrés Iniesta, one of the standout players of the match, duly dispatched the resulting penalty kick to give his side the lead. Despite the setback, Granada kept its head in the game and Piti could have levelled matters but instead saw his shot smash off the crossbar. Just before the break the referee pointed to the spot again after he adjudged that Fran Rico’s challenge on Iniesta was a foul. This time Fàbregas stepped up to put away the penalty, doubling the blaugrana’s lead.

Just as Lucas Alcaraz’s men were enjoying their best few minutes of play in the second half, Neymar found Alexis with a great pass which the Chilean took full advantage of, beating Roberto in the resulting one-on-one. Pedro got the last goal for the Catalans to make it 4-0 to Barcelona.