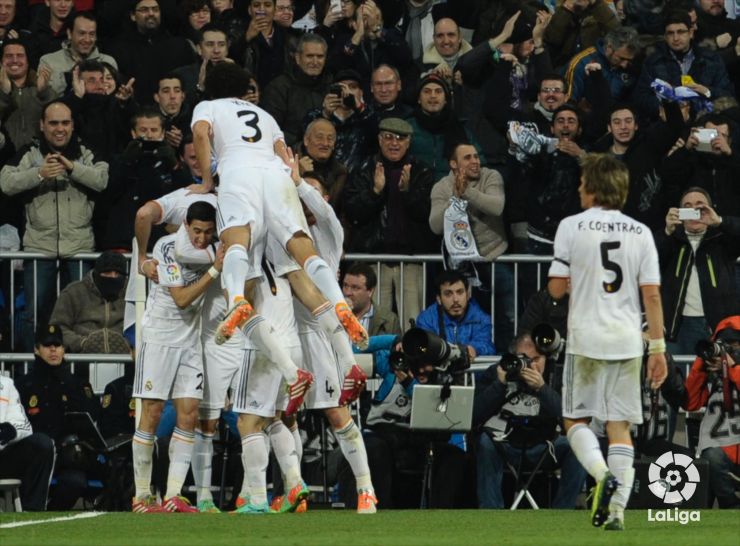 A giant step for Real Madrid in the cup

The Whites won the derby with Atlético 3-0 while Barcelona beat Real Sociedad 2-0 in the Copa del Rey semi-finals.

Real Madrid CF and FC Barcelona have one foot in the door to the final of the Copa del Rey on the 19th of April. The second-leg matches will be played next week, when the finalists of the competition will be decided.

The night of cup matches started in style. The Madrid derby between Real Madrid and Club Atlético de Madrid ended in a 3-0 victory to the Whites. Despite the resounding result, Atlético de Madrid had chances to add a little pressure to the second-leg, but luck was not on its side. Pepe opened the scoring in the 17th minute with a shot from outside the box that took a deflection of Emiliano Insúa before coming to rest in the back of Thibaut Courtois' net.

After the break, Atlético de Madrid upped their game in search of an equaliser. But Carlo Ancelotti's men were not going to let of a chance to wrap the tie up at home pass them by. In the 57th minute, Ángel Di María snuck down the left wing and his perfect cross was met by a precise finish from Jesé Rodríguez. It was the Argentinian whose great strike from outside the box clipped Miranda on its way home to end the scoring in the Santiago Bernabéu.

The second of the night's clashes was in the Camp Nou, where FC Barcelona and Real Sociedad de Fútbol made their respective first assaults on the final. It was a close first half played at a high-tempo and there were chances for both teams, but on the verge of the break Sergio Busquets latched onto a rebound in the box and rifled the ball past Eñaut Zubikarai.

After the restart, the txuri-urdin came out fighting, proving more solid in defence while looking for a goal in order to open up the second-leg. But in a turn of events that was unfortunate for the team from Donostia, Zubikarai redirected an Alexis Sánchez shot into his own net after 60 minutes of play. A ten-man Real managed to hold off Barça, who were looking to put the tie to bed, in order to keep the match alive going into the return game.