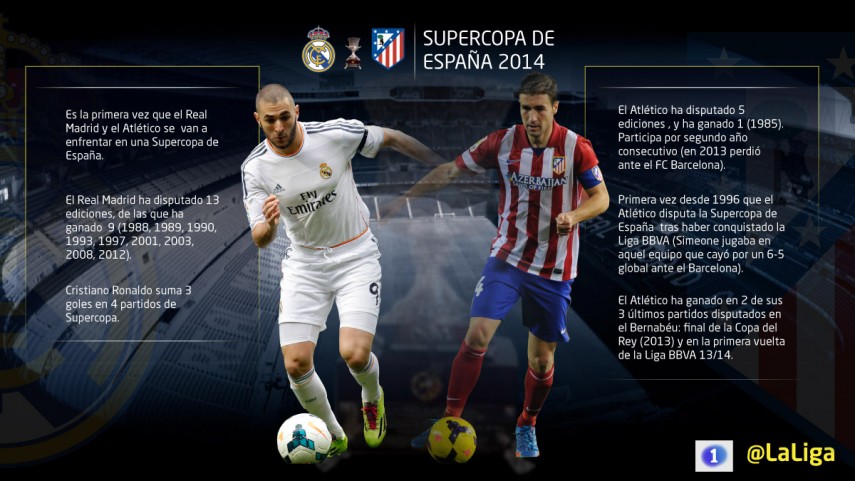 Real Madrid and Atlético, the Copa and Liga champions last season, will go face to face in a Supercopa de España that promises plenty of excitement and entertainment.

The 31st Supercopa de España promises to be one of the most exciting in recent memory. Real Madrid CF, as champions of the 2013/14 Copa del Rey, and Club Atlético de Madrid, as champions of the 2013/14 Liga BBVA, will battle it out for the title in a first leg on Tuesday 19 August at the Santiago Bernabéu Stadium, followed by a second leg on Friday 22 at the Vicente Calderón Stadium. Entertainment is guaranteed.

After conquering the UEFA Super Cup just a few days ago with a 2-0 victory over Sevilla FC, Real Madrid go into the event aiming to claim their second title of the season. Carlo Ancelotti’s men are bidding for six titles this campaign after conquering the UEFA Champions League and Copa del Rey last season, so they will attempt to keep intact their dream of making history by winning all the trophies they are in contention for.

Since the arrival of Diego Simeone to the Vicente Calderón dugout, the Argentine manager has managed to add the Liga BBVA, Copa del Rey, UEFA Europa League and UEFA Super Cup trophies to Atlético’s cabinet. Now Simeone faces the challenge of winning a title that has eluded the club for 29 years.

A Supercopa of 'debutants'

Though it is unlikely that all of them will have game time, up to eleven players will experience their first Supercopa de España and their first Madrid derby. For Atlético, Miguel Ángel Moyà, Antoine Griezmann, Mario Mandžukić, Jan Oblak, Guilherme Siqueira, Cristian Ansaldi, Raúl Jiménez and Jesús Gámez could make their debuts as new reinforcements for the 2014/15 campaign; for Madrid, three new signings come into the mix: Keylor Navas, James Rodríguez and Toni Kroos.

It will be a special reunion for Mandžukić and Kroos, friends and team-mates who decided to leave FC Bayern München this summer for the Spanish capital. Both Atlético's Croatian player and Real Madrid's German footballer won the equivalent title in Germany as team-mates. Now they must do battle on opposing sides to taste success again.

What the stars say

For Carlo Ancelotti, the Real Madrid manager, the Rojiblancos have evolved since last year. "I think Atlético have changed a bit. They have signed important players and have also changed the way they play. As always, they'll be difficult opponents", stressed the Italian.His counterpart at Atlético, Diego Simeone, appeared ambitious and was full of praise for his opponent: "The aim is to attempt, in our way, to dictate what happens in the match and win the Supercopa. Real Madrid are undoubtedly a better team than they were last year".