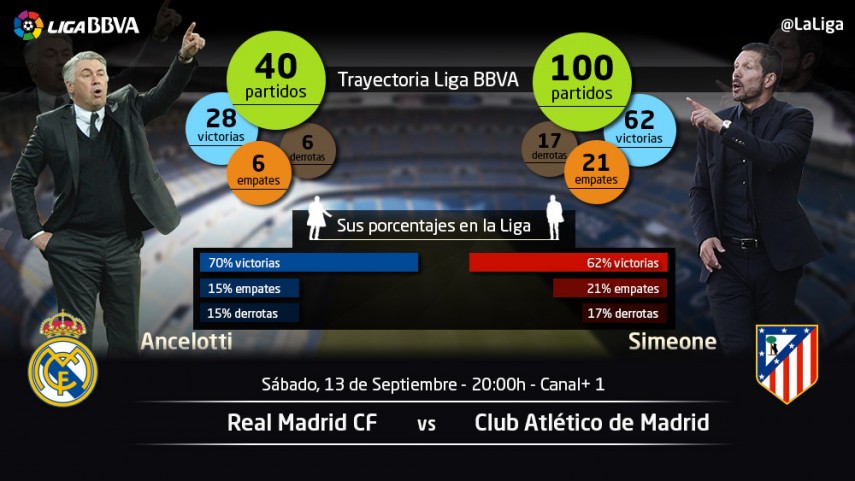 A derby on the benches

Ancelotti and Simeone will be the protagonists on the side: both will want to secure a win, and their strategy will be key to the three points.

Experience against passion, Mr. Cool versus Mr. Explosive, power against the chalkboard. This Saturday Real Madrid take on Atlético Madrid. Carlo Ancelotti and Diego Pablo Simeone will also have their own match from the sidelines at the Santiago Bernabéu, hoping their star men can give their best and secure a win.

This will be the eighth time the managers have faced off, and the third in Liga BBVA since the Italian arrived at the Whites last season. In the 2013/14 matches the Rojiblancos had the upper hand: one win (0-1) and a draw (2-2), results that helped them win the Liga BBVA title.

Carlo Ancelotti has not beaten Atleti in Liga BBVA: one loss and a draw

But this campaign, both sides start from zero after experiencing many changes during the summer. Ancelotti goes into the derby with new faces Toni Kroos, James Rodríguez, Javier 'Chicharito' Hernández and Keylor Navas. They will all be anxious to help their new club enjoy success this season.

Simeone, meanwhile, will be looking to transfer the importance of this tie to new arrivals Miguel Ángel Moyá, Guilherme Siqueira, Antoine Griezmann, Mario Mandžukić and Raúl Jiménez. However he will need this message to be transmitted by his assistant Germán Burgos, given he is serving suspension.

In this calendar year, the coaches have faced each other on seven occasions, and enjoyed the derby in all competitions. Ancelotti will be keen to secure his first win over Atlético in Liga BBVA, having done so in the Copa del Rey and Champions League, famously sealing the win in extra-time.

Simeone will be looking to win at the Bernabéu again, having already secured a Copa win in 2013 and the Supercopa three weeks ago. His strategy will be fundamental: dead balls and set-piece routines will be decisive this season for Atleti, especially in the derby.

For this, Ancelotti will have closely studied Koke and Gabi, two of the players to cause Madrid the most problems last season, and will be looking to combat them with the attacking threat that his side boast. There will definitely be emotion on the sidelines.