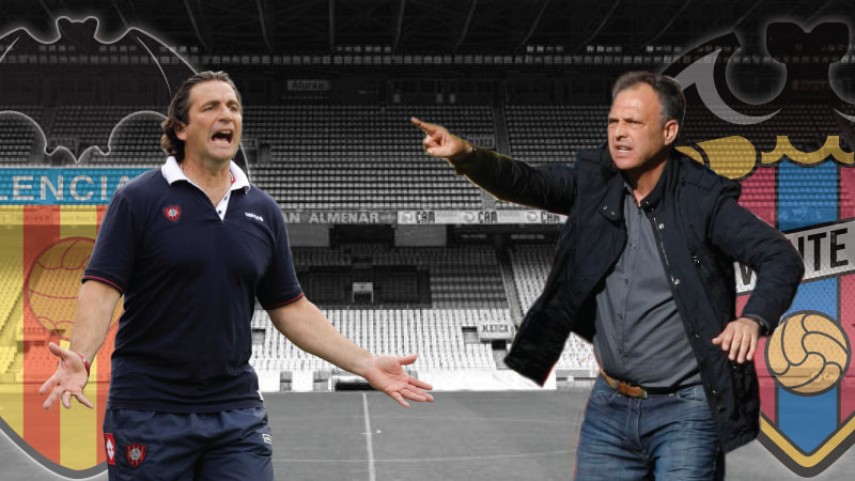 A derby for first-timers

Caparrós and Pizzi make their debuts in the Valencia derby. In addition, Pizzi will be taking the reins for his first match at the helm of the team from the Mestalla.

A local derby always has that something extra and since the 1963/64 season, when they met for the first time in the Liga BBVA, the history of the clashes between Valencia CF and Levante UD has thrown up a number of interesting situations. The match to be played this Saturday will provide another one; it will be the first for both coaches.

It will be an unforgettable debut for Juan Antonio Pizzi, as it will also be his debut as Valencia's manager. The Argentinian coach will manage his first match in front of the fans in the Estadio de Mestalla following his recent signing with the ché. It is an encounter that Pizzi is "looking forward to", although he is aware of "our needs and the importance of winning a derby".

The coach joined Valencia during the last week of 2013 and the statistics are on his side. Historically, a manager's debut in the Mestalla has been synonymous with victory, with seven of the last eight debutants winning their first match.

On the visitors' bench will be Joaquín Caparrós. It is the first season in charge of Levante UD for the Andalusian and, therefore, Saturday's match will also be his first Valencian derby. However, for the manager from Utrera it will be the 22nd derby of his career. Caparrós' CV includes regional clashes with Sevilla FC on 10 occasions, eight at the helm of Athletic Club against Real Sociedad, and four as the manager of RC Deportivo de La Coruña against RC Celta de Vigo.