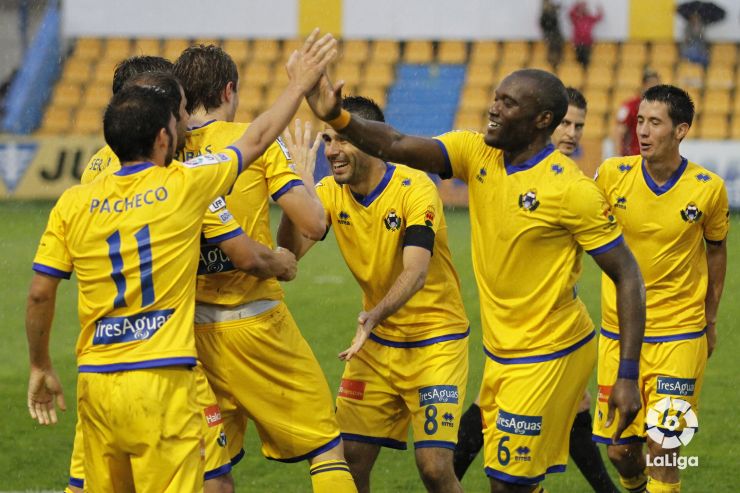 A club in constant growth

Having competed in two consecutive promotion playoffs, Alcorcón's new challenge will be to go one step further and win promotion to the Liga BBVA.

42 years ago, on the 20th of July 1971, the Agrupación Deportiva Alcorcón was born. It began with a football team for young players from the capital's municipality, today it is a club with great hope and expectation.

Alcorcón's recent history is a story full of success and, above all, one of great romance. It was not until the year 2000 when the Yellow's took their first significant step, winning promotion to the Segunda División B after 15 fifteen seasons in the Tercera División and 14 in the Regional. After nine years of battling it out in the category, the Madrid side created a name for itself in the 2009/10 season, in what was an unforgettable season for the team from the south of the capital.

That year, the name Alcorcón was on the lips of football fans across the country, no matter their background. The team managed by Juan Antonio Anquela knocked out Real Madrid CF in the fourth round of the Copa del Rey with an aggregate score of 4-1, after a memorable 4-0 victory in the home game. Despite the cup dream coming to an end in the next round, where they were eliminated by Real Racing Club de Santander, Alcorcón ended the season by winning promotion to the Liga Adelante. To do so, the Yellows had to come back from 0-2 down against Ontinyent FC in the decisive match, to end up winning 3-2 with a last minute goal which unleashed ecstatic celebrations in the Estadio Municipal Santo Domingo.

From there the team has kept growing, but it has never lost its humility and modesty. Alcorcón has had three impressive campaigns in the Liga Adelante, finishing ninth in its debut season in the division and playing two rounds in the promotion playoffs.

This year, the team from the south of Madrid has added another achievement to its growing collection. After stringing together three consecutive victories at the start of the season, the team coached by Miguel Álvarez sat atop of the Liga Adelante table for the first time in its history.
Now, having played nine matches, just one point separates the yellow team from the playoff positions.

After two campaigns on the verge of the club's greatest achievement yet, the dream of reaching the Liga BBVA is more alive than ever.