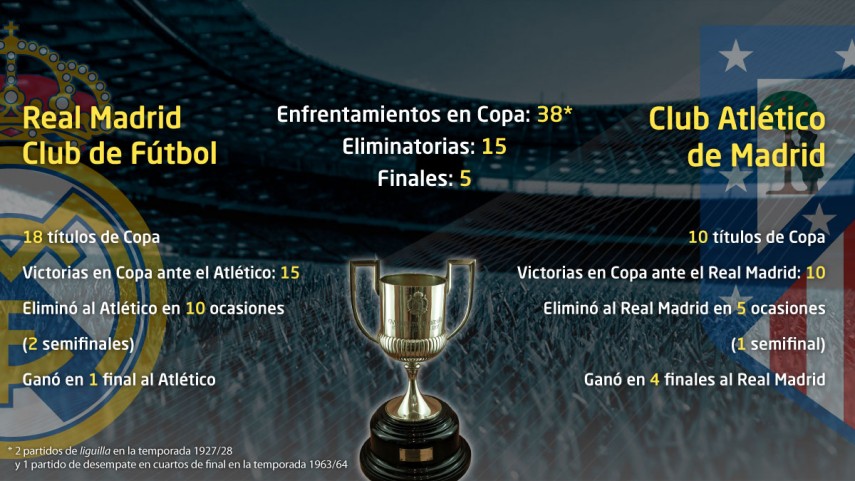 A clash replete with history

LFP.es looks back on some of the most famous Cup clashes between Real Madrid and Atlético and also remembers some of the clubs’ legendary players like Paco Buyo and Abel Resino.

Everything is ready for Real Madrid and Atlético Madrid to meet once again in the Copa del Rey. Today the Santiago Bernabéu will play host for the 39th instalment of this historical local rivalry in the Cup competition, and this particular meeting between the sides is shaping up to be the start of one of the tightest and most spectacular semi-finals in recent years.

Of the 38 previous Madrid derbies in the famous tournament, Real Madrid has won 15, Atlético 10 and there have been 13 draws. The teams have met 15 times in the knockout stages, five times in the final, twice in the group stages and have had to go to penalties on one occasion. While the Whites have beaten the Mattress Makers in the knockout stage ten times and once in the final, the Red and Whites have sent their uptown neighbours out of the competition on five occasions and have triumphed over them in four finals.

The first cup games between Real Madrid and Atlético occurred during the 1927/28 season, when the tournament used a play-off format, and since then the clubs have been involved in plenty of other matches that have gone down in Spanish footballing folklore. Six of those encounters were disputed during the only three times the clubs have ever met in the semi-finals of the competition.

Abel Resino: "Luis Aragonés convinced us that we could win the semi-final during the 1986/87 season"

The first semi-final clash between the sides took place during the 1979/80 campaign, with the Real Madrid of José Antonio Camacho, Vicente del Bosque, Juanito and Santillana sending the Red and Whites out after a penalty shootout. The result made for an unusual Cup final as the Whites took on their reserve team, Castilla CF. Following on from that, it was the turn of the 1989/90 Atlético team, with Abel Resino in goals and Luis Aragonés in the dugout, to triumph.

"That was a very close tie. I remember the second leg in particular, when we were on top and were mentality rock solid thanks to Luis Aragonés. He convinced us that we could win that semi-final", Abel Resino recounts to LFP.es, who was part of that team that managed to beat the Whites 4-3 on aggregate.

Just two years later, in the 1988/89 season, a Real Madrid side made up with the likes of Paco Buyo, Manolo Sanchís, Míchel and Emilio Butragueño got its revenge by beating Atleti 3-0 on aggregate, before going on to scrape a win against Valladolid in the final. "We practically tied up the win in the first leg, with a resounding 2-0 victory. We were superior in that game and then went on to confirm our superiority in the Bernabéu", Paco Buyo recalls for LFP.es. That was the last time the clubs crossed paths in the semi-finals of the competition.

But while the record favours Real Madrid in the semi-finals, the Red and Whites can boast for having beaten their eternal rival four times in the final of the competition. One of the most memorable of those victories was in 1991, when the Mattress Makers won 2-0 in the Bernabéu courtesy of goals from Bernd Schuster and Paolo Futre. "That day was magic, fantastic, marvellous. We defeated a great team in its home ground. Yes, Schuster and Futre both scored great goals, but at the beginning of the second half I had to save a Míchel penalty. When that happened I knew we would win the final", says Abel Resino.

Paco Buyo: "This semi-final will be decided on the finest of details"

The last Madrid derby in the Copa del Rey happened just eight months ago, with the teams meeting in the Santiago Bernabéu for the grand final. That night Atlético lifted the trophy for the tenth time thanks to a João Miranda headed goal in extra time, a goal that will live long in the Red and White fans’ memories.

Both Buyo and Abel, who are among the best goalkeepers in the history of Spanish football, predict a clash between two titans. The former Real Madrid keeper expects "a tremendously close two legs" which could be decided "on the finest of details", while the former Red and White keeper thinks that Diego Pablo Simeone’s side holds a slight advantage.

"I expect two very even matches, but I also think Atlético is more confident than ever. It is a strong, determined team that is very difficult to beat. Real Madrid is a great team, but is quite unstable at the moment and I don’t have much faith in their chances", pointed out a Abel Resino who is hoping his former team can dedicate another trophy to the man who took them to the very top of the game. “Luis Aragonés is an Atlético icon, as well as a footballing icon. The best way to honour him is by beating Real Madrid and reaching the Cup final".