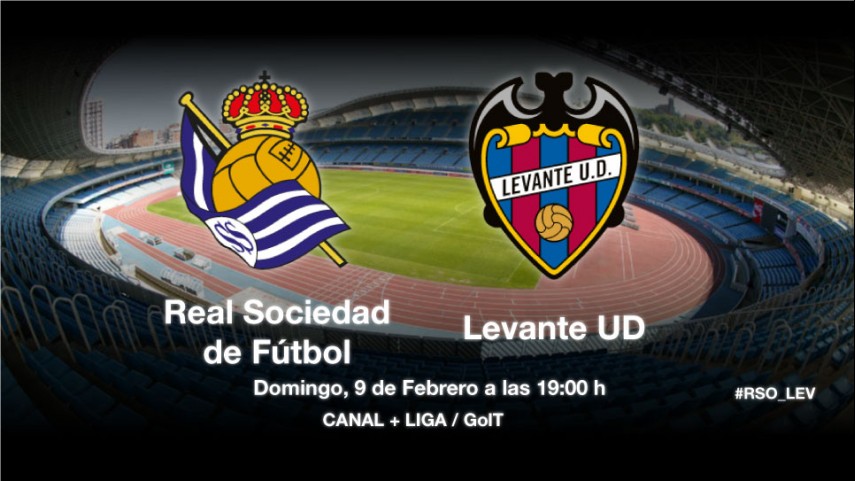 A clash of aspirations

Real Sociedad look to stay in the wake of Villarreal, who are four points ahead, and to do so they are hoping to overcome a Levante who are fighting to move towards the European spots.

Real Sociedad de Fútbol hosts Levante UD on matchday 23 of the Liga BBVA in a clash that takes place in the Anoeta on Sunday at 19:00.

The txuri-urdin are looking to return to winning ways after a 4-0 defeat at the hands of Club Atlético de Madrid. Currently occupying a European spot, Real Sociedad are hoping for a positive result in order to catch the team above them, Villarreal CF, who have four points more. The Basque team's coach, Jagoba Arrasate, stated that they are only thinking about the next Liga BBVA game: "The azulgranas we are worried about are the ones on Sunday". Arrasate will be without midfielder Esteban Granero and defenders Mikel González, Dani Estrada and Alberto de la Bella for the match.

The visitors, managed by Joaquín Caparrós, have not won any of their last four games, with two draws and two victories. The team's coach has included newly-signed Víctor Casadesús on his team-sheet, but left out Mohamed Sissoko. Caparrós gave a press conference in which he spoke of his respect for his opponents in San Sebastián on Sunday: "Real is a magnificent side of quality players who form a high-quality team", said the manager.