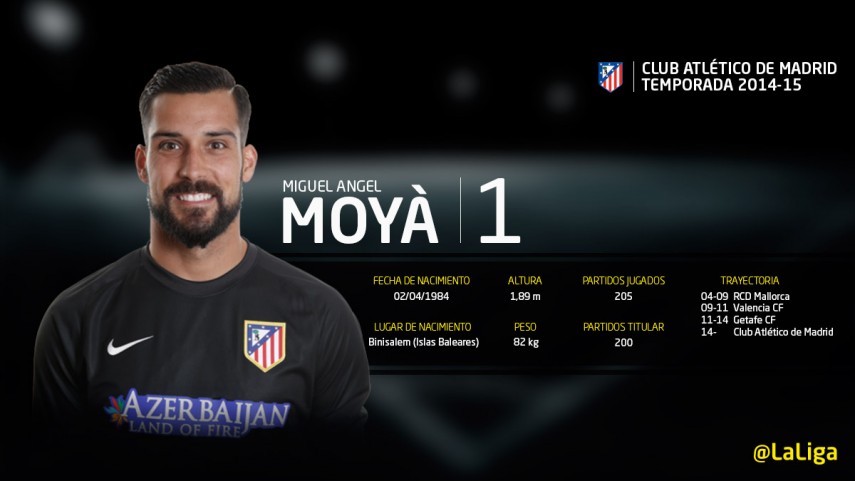 Moyà spoke to LFP.es about his introduction to Atlético, his excitement about his new venture and the challenges that await the defending champions of the Liga BBVA.

The greatest challenge of his professional career; this simple phrase could define the new stage in the career of Miguel Ángel Moyà (Binisalem, Balearic Islands, 1984) with Club Atlético de Madrid. The ex-RCD Mallorca, Valencia CF and Getafe CF player is approaching the task with the maturity and experience of a keeper who is destined to fight for the space left in the team by the exit of Thibaut Courtois. LFP.es spoke to him exclusively to ask him about this and to analyse the Liga BBVA champions.

LFP.es: What was the decisive factor in your signing for Atlético?

Moyà: I've been very happy these last three years at Getafe, I've played nearly every game and felt very comfortable, loved by the fans and by the club in that sense… but, when you turn 30, you realise that a chance like this, to go to Atlético de Madrid, is practically irresistible in every sense. I did not hesitate to accept. It was a very quick operation.

LFP.es: Jan Oblak and you have moved to the club after the exit of Courtois, one of the best goalkeepers in the history of Atlético. Does that add pressure?

Moyà: Courtois was one of the best keepers in Atleti's history. In terms of titles and charisma he was a very important and well-loved keeper. But, evidently, if someone leaves others have to arrive. In this case Oblak and I have arrived. We know that Courtois did really well and our goal is to do well and train, not to help people forget about Courtois, but so that they see that Atleti has brought in two good keepers and that we are going to try and perform.

"Courtois was one of the best keepers in Atleti’s history"

LFP.es: Nobody will see Atlético as an unexpected candidate for the title this year. How do you think other teams will play against you in a season in which you are defending the title?

Moyà: Of course, when you win the championship and have a great season like Atlético did last year, it's inevitable that teams will have learned from it. But, our objective is to reinvent ourselves too and the boss strongly believes that; the moment we relax things will get much more difficult.

LFP.es: Which Atlético player has surprised you most in your first weeks at the club?

Moyá: Arda Turan, above all because of his charisma. I hadn't met him and you can tell he's a charismatic, well-loved and special player. In terms of football, practically everyone, I already knew them, but, for example, Koke really surprised me. Also as a person, but he is a great footballer. I already knew most of the others. I coincided with Raúl García with Spain, as well as with Juanfran, Gabi, Mario Suárez, of Mallorca…But above all Koke. He is a born footballer and could be a key player, not only for the club, but also for Spain. He is one of those players you just like. Then there's the two centre-backs: Godín and Miranda. They have been playing together for a long time and having those two in front of you as a keeper makes everything that little bit easier.

LFP.es: What is Diego Simone like to work with day to day?

Moyà: He is a coach who likes to be in his place. Of course, when he has to interact with a player, he is great at it, he explains himself very well. What shines through above everything else is the intensity he brings out in his players and that he tries to get the maximum out of everyone so that you don’t give 100% as he would say, but 150%. It is a privilege to play under him, because at the moment, in terms of the results and the way he works, he has become one of the best coaches in Europe.

"It is a privilege to play under Simeone"

LFP.es: You have played in the Calderón a few times as a visitor. What do you think of the stadium and what do you expect of playing there as an Atlético keeper?

Moyà: I've had different experiences. I've been to the stadium every year I've been in La Liga and there was a turning point. The fans there have always been the best, but with 'El Cholo' the team needs a little extra, they are united somehow with the fans and they achieve that state of fury… Experiencing that as a visitor is to realise that they are on top of you, and I imagine that as a home player it gives you the strength to keep pushing and to achieve goals.

LFP.es: Finally, what do you expect of yourself this season as an Atlético player?

Moyà: To give my best and be competitive. I was really excited about the preseason and I can't wait for what is to come. At the moment I'm happy with what I am producing in training and matches, and I am going to try and maintain that standard and if I can get improve, then all the better. But, above all, I'd like the manager to be happy with me and to be able to play when they see fit.