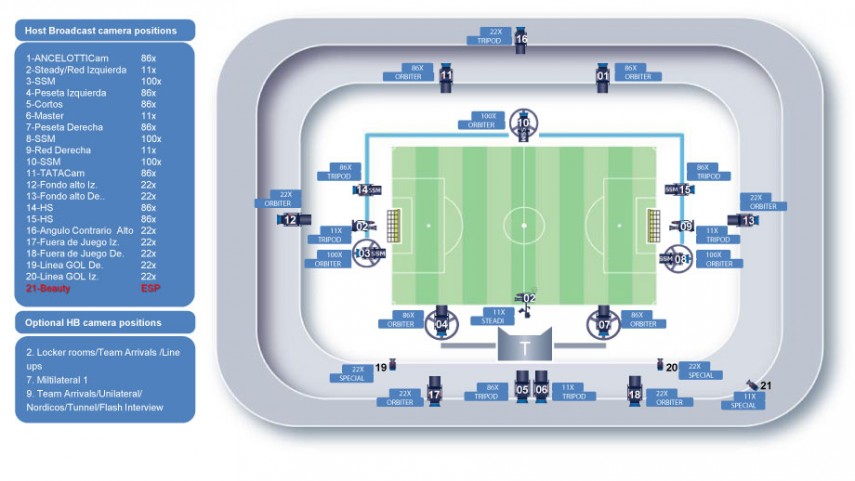 A broadcast to remember

The Barcelona - Real Madrid match on the 26th of October will have an impressive array of cameras so that football fans can watch the Liga BBVA clash in the finest detail.

Television coverage of the Clasico will include 21 high-definition cameras, three long-range views and one more for the stadium. Also, viewers will be able to enjoy close-ups of Carlo Ancelotti and Gerardo Martino's benches, so they will not miss anything that happens on the field and there will be several cameras around the stadium to capture the excitement of the big match in the Camp Nou.

The more than twenty camera positions mean that the viewer can experience the Clasico as if they were in the stadium. The television coverage will provide everything that happens on the wings and at each end of the stadium with Orbiter and Steady cameras, as well as cameras on tripods behind the goals. Sound will also be an important factor in the broadcast. The range of microphones available for the transmission of the match will mean that every pass and every shot will be appreciated in all their glory.

The excitement of the Clasico will begin to build around the stadium from early on Saturday morning with 18 official television trailers that will be located on the Camp Nou's forecourt, ready to provide the best images of the match.

The Camp Nou is to be at the centre of attention all day. The broadcast of the Clasico will offer details of what goes all behind the scenes; in the dressing rooms, around the stadium and all the important locations, both on the field of play and in the grandstands.