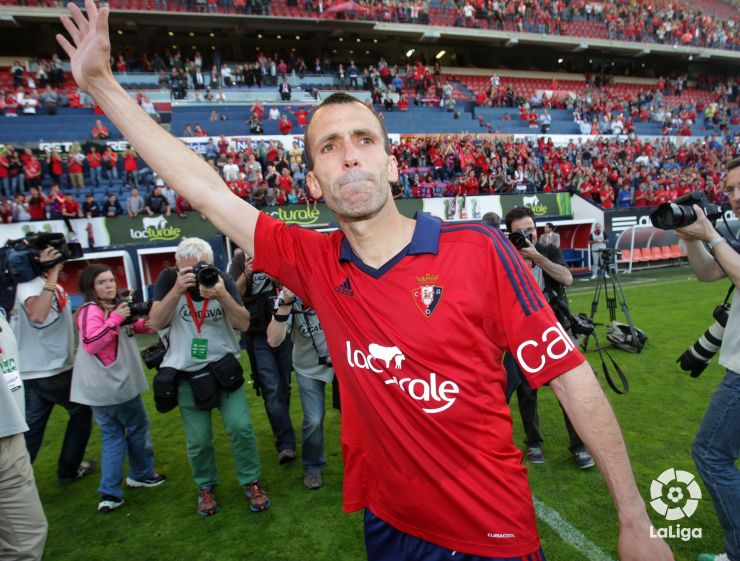 A bitter end for the eternal captain

Patxi Puñal has said goodbye to professional football after seventeen seasons as a player at Osasuna, where he has played 513 official matches as a Rojillo.

"My career has not been easy, but I had no idea that the most difficult part would come at the end". That is how Patxi Puñal ended his career, saddened by the pain of CA Osasuna's relegation to the Liga Adelante in the final match of his professional career. He leaves 17 seasons behind him and 513 matches with the Rojillos. No other player has played more matches in the history of the club from Navarre.

The midfielder from Pamplona has become a symbol of Osasuna and a fan favourite in El Sadar, where, despite the tragic news of relegation, the supporters wanted to show their thanks for so many years of commitment and dedication. Fans chanted Puñal's name in a show of affection and gave him an emotional send-off that the player will never forget.

After learning his trade in the Osasuna academy, Patxi Puñal broke into the first team in the 1997/98 season, where he spent his whole career, with the exception of the two seasons between 1999 and 2001, when he was sent out on loan to CD Leganés. His dedication helped the side stay in the Liga BBVA for 13 years.

Despite the bittersweet goodbye, the 38 year old has also had good times at the club, living through what was the Basque side's most successful period: the Copa del Rey final in 2005, the UEFA Champions League qualification (2005/06) and the UEFA Europa League semi-final in 2006/07.

The player, who announced his retirement on Saturday via the club's official website, was unable to achieve his final dream of safety in the division, but will be remembered by the club's fans as the eternal captain who gave many a happy memory to followers of the Rojillos.