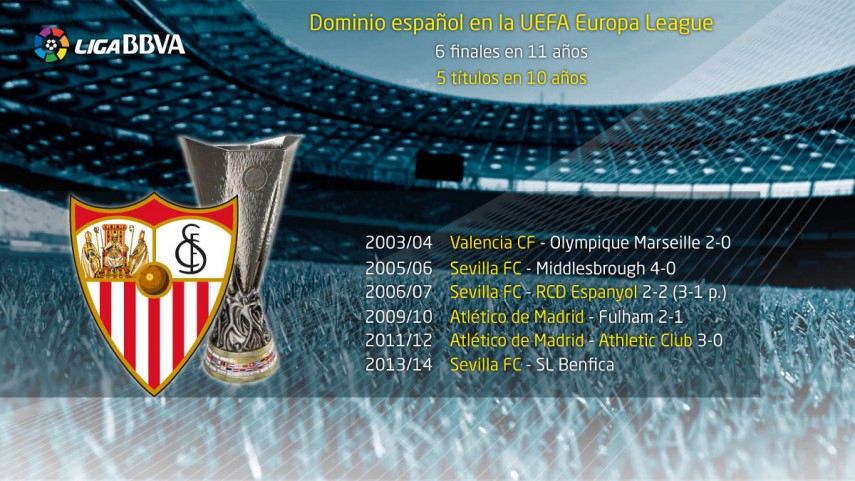 The Liga BBVA triumphs in the European elite

Sevilla have had to play more than 1600 minutes in order to book their ticket to Turin. Unai Emery’s side pulled off an epic win to seal a place in the UEFA Europa League final which will take place in the Juventus Stadium on the 14th of May.

Once again a Liga BBVA team will be fighting it out for a European title in a season in which the Europa League has had a distinct Spanish flavour. All three Spanish sides that started in the competition at the start of the season made it to the knockout stage. In fact it was Sevilla FC who left Real Betis and Valencia in their wake on the way to the final.

A long road to Turin
The Andalusian side’s route to the European final was the longest of all four semi-finalists. They got their Europa League campaign underway on the 1st of August in the Sánchez Pizjuán, and with a resounding 3-0 victory over FK Mladost Podgorica (and a 1-6 win in the second leg) they secured their place in the competition.

18 matches later and now Sevilla are in the final. They have left prestigious teams like Porto, Betis and Valencia in their dust on the way to the final. Eleven wins, four draws and three defeats are the results picked up by a team that has had to make epic comebacks in their last three encounters.

Sevilla reached and won their last Europa League/UEFA Cup final during the 2006/07 season. That match took place in the Hampden Park in Glasgow against another Liga BBVA side, RCD Espanyol. The game finished 2-2 and had to be decided on penalties, with Sevilla winning out. The previous year they beat Middlesbrough 4-0 in the final that was held in Eindhoven to claim the title for a Spanish side once again for the first time since Real Madrid won their first title in the competition in 1986.

Now only Benfica stands in the way of Sevilla tasting glory once again. Winning a third UEFA Europa League title would compound the great state of Spanish football this season, in which Spain is showing itself to be head and shoulders above the other European leagues. Of the seven teams that began in European competitions this season, three of them have reached the finals. A real success story for Spanish football.