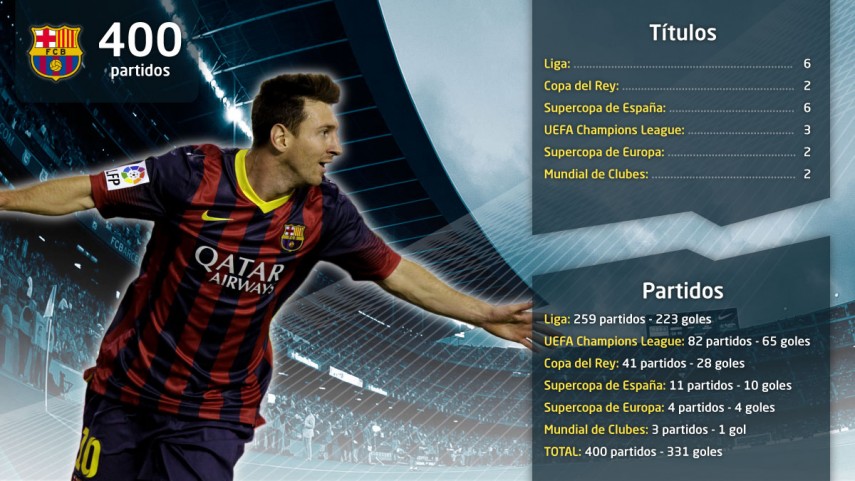 The Argentine forward made his debut in October 2004. Today, nearly a decade on, he celebrates his 400th appearance for Barcelona.

Small, fast and longhaired accurately describes the Argentine forward who, on the 16th of October 2004, made his FC Barcelona debut, at just 17 years of age, against RCD Espanyol in the Estadi Olímpic Lluís Companys. In a match that would make him the youngest player to ever represent the Catalan giants in the Liga BBVA.

That night was the beginning of what would turn out to be a sensational footballing career filled with success. Almost a decade since that date, Lionel Messi makes his 400th appearance for the blaugrana against Levante. This comes just one week after Xavi Hernández celebrated his 700th appearance for Barcelona, also in a cup match, this time against Getafe.

Very early on in his career, Messi turned the biggest of sceptics in the world of football into ardent followers of his exploits in the Camp Nou (1st of May 2005). A subtle lob to find the back of Albacete's net gave a glimpse of what was to come from the prodigious Rosario youngster. That would be the first of the 331 goals the Argentine has scored so far for his club.

Since making his debut against Espanyol, the 21 titles he has won speak volumes about how far the striker has come along: six Liga BBVAs, three UEFA Champions Leagues, two Copa del Reys, six Spanish Super Cups, two Club World Cups and two European Super Cups sit proudly in the 26-year-old’s impressive trophy cabinet. And he still has plenty of gas left in the tank.

Four successive FIFA Balon d'Ors as well as three European Golden Boots make up the rest of his impressive tally and stand testament to his status as one of the greatest football players of all time. Other records highlight his unique abilities. He has scored four goals in 90 minutes on four separate occasions and is the only player ever to score five goals in a UEFA Champions League match (against Bayern 04 Leverkusen in 2012).

Behind the stats lies a player with immense technical ability. The effortlessness with which his versatility allows him to start moves at any time and from any position on the pitch makes him a constant threat to opposing sides. No one could ever have imagined the impact that this small teenager with a golden left foot would have on the world of football. Messi now breaks the 400 mark with Barcelona and at just 26 years of age has plenty of time to break whatever other records stand in his way.