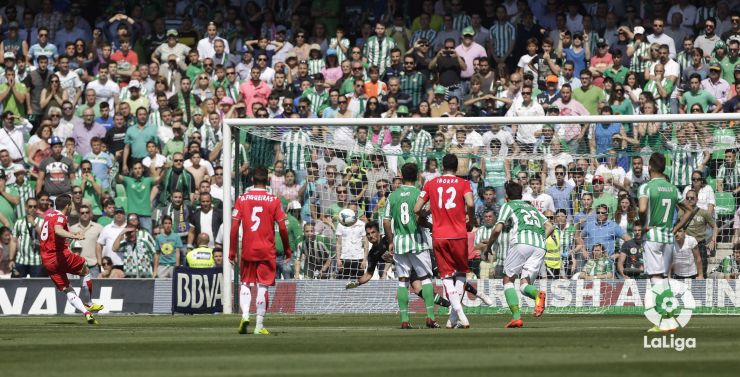 Two goals from the striker earned victory for Sevilla in the derby in the Andalusian capital and make life difficult for Betis in the fight for survival.

The party turned into a nightmare for Real Betis Balompié in the Seville derby at the Benito Villamarín Stadium on matchday 33 of the Liga BBVA. The 0-2 defeat against Sevilla FC hampers the verdiblancos' quest for survival, while fanning Sevilla’s hopes of UEFA Champions League qualification.

Gabriel Calderón brought out the heavy artillery on the field and sent a warning to his opponents by deploying his full attacking force. But for Betis that's where it ended: an intention. Because Juan Carlos' sending off and the penalty scored by Kevin Gameiro in the 29th minute forced Betis to reorganise and change their plan.

In the second half, Unai Emery's men tried to extend their lead to put the match beyond reach, but keeper Antonio Adán stayed firm. Betis took advantage to some extent of the impotence of Sevilla, who until Ivan Rakitić went on were lacking the final pass needed to score. But finally they found the net thanks to the cunning of Gameiro, who scored again after a move led by the Croat. Despite the faith and physical commitment of Betis, the three points went to the Nervión neighbourhood.