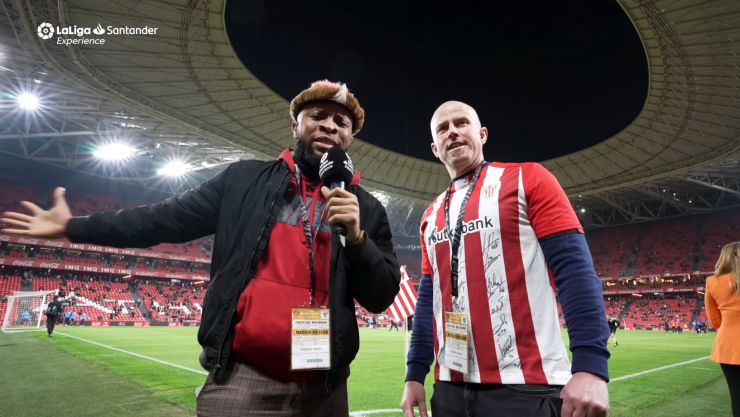 The perfect conclusion to four unforgettable days, the Basque Derby

The guests who enjoyed the seventh LaLiga Experience of the season revelled in the thrilling clash between Athletic Club and Real Sociedad, which ended in victory for the home side

The guests of SuperSport (Nigeria and South Africa) and C-More (Sweden) were welcomed in San Mamés and its environs, and they soaked up the festive football atmosphere from the moment they entered the gates.

Twiggy Moli, Julia Stuart, Chuey Chu and the winner of the LaLiga Ultimate Challenge, Mikael Karlsson, were given a special side line tour and watched as the tribunes began to fill up from a privileged vantage point.

There were still plenty more surprises in store. Not only did they meet Athletic Club legends Jabo Irureta and Manolo Delgado, they also bumped into another player who made his mark on the club's history, Aritz Aduriz, who shared an unforgettable moment with them with the ball.

The lightshow and the crowd singing the Athletic anthem at the top of their lungs gave a taste of what was to come: a brilliant match between the two Basque outfits, in which Los Leones came out on top with a convincing 4-0 win in front of their fans. The guests jumped, cheered and felt the thrill of each of the goals that the team gifted their fans to top off four unforgettable days in Bilbao as VIP guests of the #LaLigaExperience.