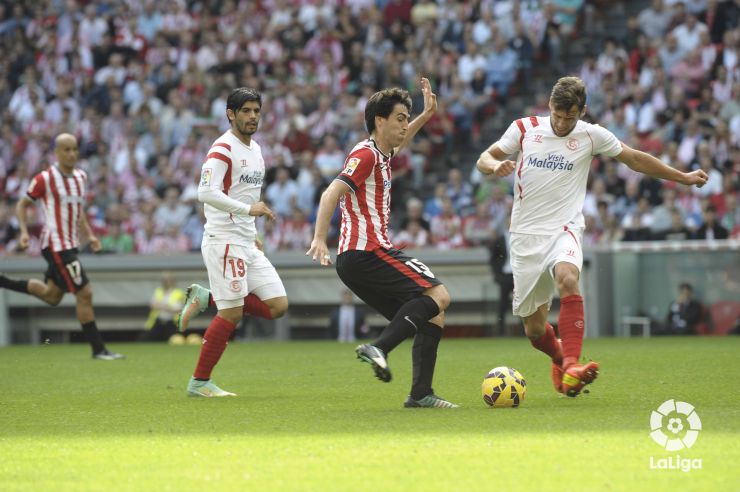 Athletic stop Sevilla in their tracks

Thanks to a lone goal from Aduriz, Ernesto Valverde's men overcame a Sevilla who missed their chance to become sole leaders of the Liga BBVA.

Athletic Club recorded their second win on the trot in the Liga BBVA, beating Sevilla FC 1-0 on matchday 10 of the championship. Aritz Aduriz was the man who found the net for the Rojiblancos, who managed to bring the Andalusians' three-victory run to an end and prevent them from becoming sole championship leaders.

Athletic came flying out of the blocks, persistently looking to penetrate the opposition's box from the kick-off. The home side took the lead 13 minutes in through Aduriz, who received the ball from Markel Susaeta on the right wing and beat Beto with a superb volley. Aduriz later had to withdraw with an injury, but the Basque side, for whom Susaeta was the liveliest player, continued to create danger until the break.

In search of a comeback, Unai Emery brought on Éver Banega and Kevin Gameiro at the start of the second half. The changes allowed Sevilla to create much more danger, but Athletic were solid in defence and managed to defend their lead until the final whistle.