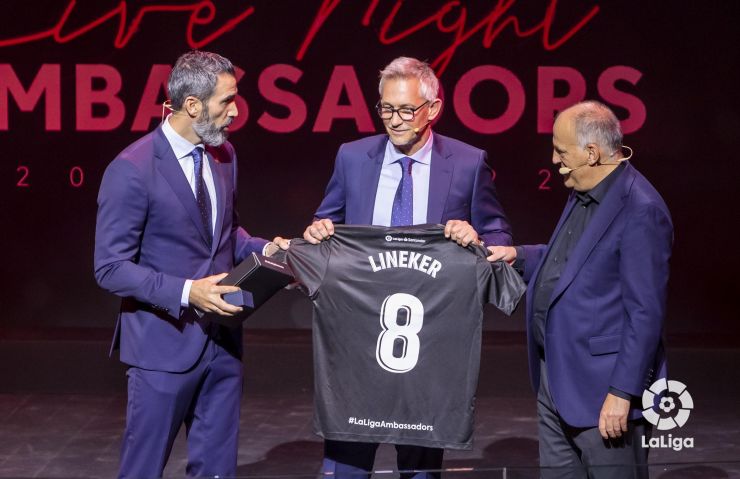 Gary Lineker joins the team of LaLiga Ambassadors for the 2021/22 season.

LaLiga has unveiled the new additions to its Ambassadors programme with a special event in Madrid, the Ambassadors Live Night. LaLiga has this season bolstered its squad of Ambassadors with the arrival of a globally known star: former FC Barcelona striker, Gary Lineker, who currently commentates on LaLiga games for the United Kingdom, South Africa and through LaLiga TV. Lineker joins an Ambassadors project now entering its eighth season.

LaLiga President Javier Tebas; Director of Institutional Relations and the LaLiga Ambassadors programme Fernando Sanz; and LaLiga Executive Director Oscar Mayo all welcomed the new Ambassador and reiterated the importance of the relationship with sponsors that represent LaLiga and its competitions around the world.

They will all work hand in hand with LaLiga to bolster its internationalisation, promote its values around the globe, share their experiences as former professional players, and contribute knowledge in other strategic markets, as well as adding incalculable value to the LaLiga brand.

In addition to the official LaLiga Santander Ambassadors presentation, LaLiga’s national and international sponsors did not want to miss out on the gala and the opportunity to connect with football lovers around the world.

Sponsorship agreements have been pivotal to the growth of LaLiga in recent years. Thanks to their core positioning in the organisation's strategy, LaLiga has doubled its commercial revenue in the past three years, striking agreements with leading national and international brands.