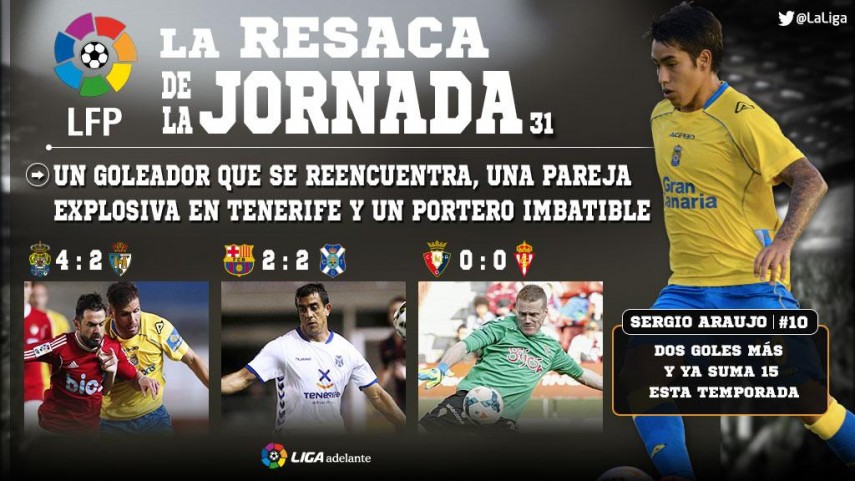 A marksman back among the goals and an unbeatable keeper

As the Liga Adelante enters its final stages, the excitement grows with each game and, as Las Palmas's Sergio Araujo and Sporting's Alberto García showed, the impact of individual displays becomes pivotal.

Matchday 31 of the Liga Adelante once again left no-one in any doubt about how even the division is. The tables can be turned at any moment, matches are decided by small details, the impact of individual players becomes decisive and any piece of play can be the difference between staying in the fight and slipping down the standings. Sergio Araujo's goals, Alberto García's fantastic saves and the sharp shooting of the Uruguayan duo of Diego Ifrán and Maxi Pérez were among the highlights of the weekend.

It had been more than two months since UD Las Palmas’s Argentinian player Sergio Araujo had scored his last goal in the Liga Adelante; a long time for a man with goals running through his veins, who arrived at the club and quickly became the fulcrum of Paco Herrera’s attack. Against SD Ponferradina, the killer instinct of the Canary Islanders’ number 10 returned to the fore as he helped his side to a 4-2 win with two goals and an assist, to see his team close in on the automatic promotion spots.

Against SD Ponferradina, the killer instinct of Las Palmas’s number 10 returned to the fore to help his team to victory.

CD Tenerife’s ascent towards survival in the Liga Adelante is well and truly on. Raúl Agné’s charges have now gone seven matches without tasting defeat, putting together three wins and four draws. And the stars of los tinerfeños’ revival have been their duo in attack, the Uruguayan pair formed by Diego Ifrán and Maxi Pérez.

In the last month, they have scored all of Tenerife’s goals in the Liga Adelante to become true talismans for their club. Ifrán has ten in the league so far, with three coming in March, while his team-mate Maxi has also exploded in the past 30 days of the division, displaying his scoring touch to hit the net four times. Against FC Barcelona B (2-2), both were again on target to earn their team a point.

Alberto García has made the number-one spot his own since team-mate Iván Cuéllar's injury.

A goalkeeper who’s hard to beat

If there is a player who has stood out for his side in recent games, it's R. Sporting's Alberto García. The Catalan goalkeeper, who joined the Asturian outfit in 2013/14, has made the number-one jersey his own following the injury suffered by colleague Iván Cuéllar, playing seven matches for the team coached by Abelardo Fernández.

Alberto’s most recent display, on matchday 31 of the Liga Adelante, saw him exhibit his full repertoire of saves to deny At.Osasuna victory in a 0-0 draw, underlining his great form and making it clear that there will be battle to start in goal when his team-mate returns.