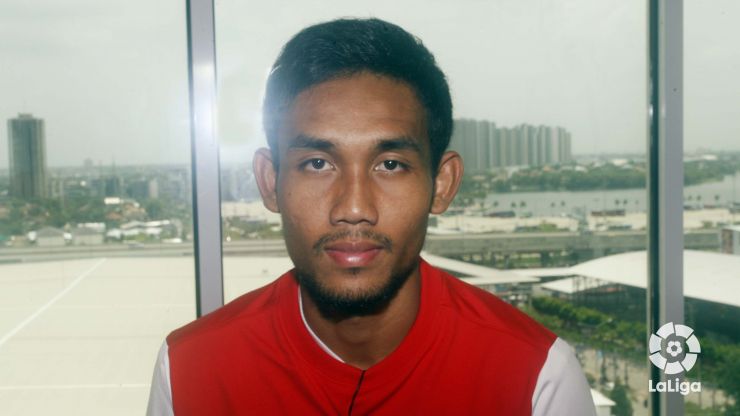 Teerasil: "I'm really happy to play in the best league in the world"

The player, in an interview with LFP.es, was very excited about UD Almería’s tour in Thailand.

UD Almería’s arrival in Thailand for the LFP World Challenge Tour has aroused great expectation in the Asian country, thanks to Thai star Teerasil Dangda, one of the Andalusian outfit’s recent signings. The 26-year-old player, in an interview with LFP.es, spoke of his enthusiasm for playing the preseason in front of his own people.

"It’s great that the Spanish league has come to Thailand. People are really interested and now a lot of them support UD Almería. Since Spain won the FIFA World Cup, Thai society has really got into the Spanish league", revealed Teerasil Dangda.

The Thai player is very grateful for the welcome he received when he arrive in Spain: "I’m still getting used to the city, the culture and Spanish life, because it is very different to where I come from. Almería is a very peaceful city, I was surprised at the generosity of the people. I’m very happy there. My teammates made me feel welcome. They help me a lot with the language".

Teerasil, known as 'Mui', also said that he was very "happy to play in the best league in the world. The Spanish league has great players. I look up to Cristiano Ronaldo and Messi. I’m really excited about playing against FC Barcelona and Real Madrid CF. In Thailand they are the most followed teams by lovers of football".

In addition, the Thai star wanted to show his thanks for the welcome he received when he arrived in Bangkok on the LFP World Challenge Tour. "I’m really happy about the welcome we have been given since we arrived. The welcome at the airport was very emotional for me and my teammates", finished Teerasil Dangda.