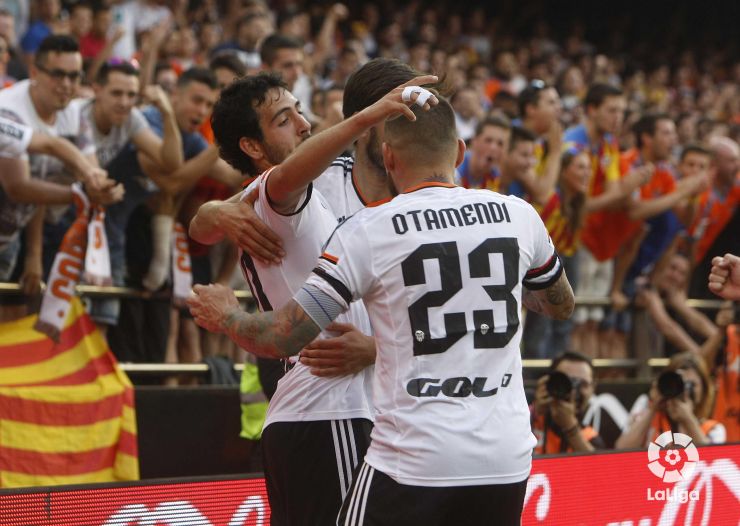 Los che moved three points ahead of fifth-placed Sevilla after a 3-1 win over a spirited Eibar outfit.

Valencia CF saw off SD Eibar 3-1 on matchday 35 of the Liga BBVA, taking advantage of Sevilla FC’s defeat on Saturday to go three points clear of the Andalusians in the table.

As was to be expected, the match got underway with Valencia the dominant force and it stayed that way throughout the first 45 minutes, although they came up against an Eibar outfit who were solid in their defensive duties. With a quarter of an hour on the clock, Paco Alcácer called Xabi Irureta into action with a good shot, while Federico Piovaccari responded with a headed attempt shortly after. Finally, carelessness from the visitors saw José Luis Gayà cross from the left for Nicolás Otamendi to pop up at the far post and nod in to make it 1-0 after 25 minutes. And the half-time scoreboard could have made for worse reading for Eibar, but Irureta denied the hosts a second with a fine save from Rodrigo De Paul’s effort.

Eibar came out for the second half in search of an equaliser, but after 56’ Valencia extended their lead. After a De Paul shot had rebounded off the crossbar, the home team retained possession and recycled the move for the ball to run to Dani Parejo, who beat Irureta from the edge of the area. The goal saw Eibar’s heads drop and, on 71 minutes, Alcácer settled the match from a close-range rebound after Parejo’s free-kick had hit the post. With six minutes left, Mikel Arruabarrena scored a consolation for the away side. The victory sees Valencia move away from Sevilla with los che also holding the advantage in the clubs’ head-to-head record, while Eibar must continue their fight for survival.