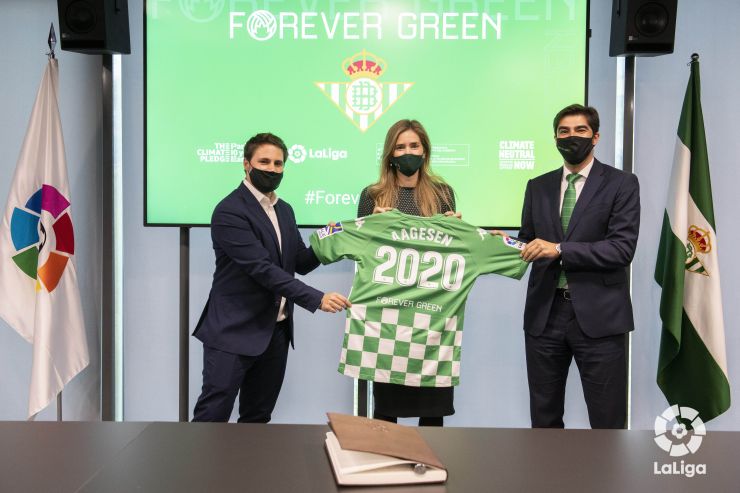 The Club, the Government of Spain and LaLiga presented in Madrid a unique initiative to promote environmental action. United Nations and Amazon endorse this program.

Real Betis Balompié has presented today in LaLiga headquarters in Madrid the program ‘Forever Green’, a sustainability platform for companies and institutions that want to use the most popular sport in the world to save the planet. ‘Forever Green’ is a commitment founded by Real Betis with the purpose of creating a conscience among the population about the current need of fighting against climate change.

The presentation had the participation of the Secretary of State for Energy, Sara Aagesen; the president of LaLiga, Javier Tebas; and the president of Real Betis Balompié, Ángel Haro. Niclas Sveenningsen, manager for the Global Climate Action Team of United Nations; Sally Fouts, of Climate Pledge Amazon; and Real Betis player and Chile national team captain, Claudio Bravo, also took part in the event.

“We think football is a worldwide loudspeaker and we see it as a great opportunity to create conscience about environmental problems, promoting Real Betis as a model to follow for other companies, clubs and fans”, stated Ángel Haro, president of the Green and White club. “We encourage all companies and institutions to join ‘Forever Green’, linking their image to the most popular sport in the world and to a cause supported by the younger generations”, added Haro.

The aim of ‘Forever Green’ is to be an open platform for companies and institutions that want to get involved and show the world how they are going to contribute to the future of our planet and that also want to become a model to follow for football fans. The signing companies will have the chance to collaborate on the projects programmed by Real Betis to reduce carbon emissions and create a bigger social conscience in order to address the climate crisis. Every company has a great responsibility to look after the planet and not compromise future generations, and ‘Forever Green’ promotes different actions for it.

“We are really happy about initiatives such as ‘Forever Green’, promoted by Real Betis. It is exciting to see how, from the world of sports, brave and responsible steps are being taken, contributing to the sustainability of the planet and helping to create a social conscience. Climate change is a huge challenge, it affects us all and there is a lot at stake”, explained Sara Aagesen, Secretary of State for Energy.

“It’s a pride for LaLiga that its clubs take steps for the sustainability and commitment with the environment, as Real Betis is doing with its fantastic project ‘Forever Green’. From LaLiga, we are also supporting our clubs in the generation of such initiatives through the Guide for the Creation of Non-Financial Reports that we have recently presented”, said the president of LaLiga, Javier Tebas.

Real Betis became, in 2019, the first football club to join the United Nations initiative ´Climate Neutral Now’, committing to measure and reduce its carbon footprint, as well as to compensate the inevitable emissions with the purchase of carbon offsets of certified projects for climate protection. To achieve these goals, the Club also merged with First Climate, a German project developer and climate protection solutions provider.

After calculating and reducing its greenhouse gas emissions, the Green and White club took a step forward to compensate its emissions, becoming a Carbon neutral club. To compensate for said emissions, Real Betis decided to support an emissions reduction project in Latin America, the Orosi Wind Farm in Costa Rica. The project consists in the installation of 25 wind turbines in the province of Guanacaste. Each one of these turbines has a capacity of 2 MW. This project contributes to the diversification of the Cota Rican energy matrix by using the wind energy potential of the country. At the same time, the project offers an important alternative to the prevailing use of hydroelectric plants and is a good option for the energy generation during the dry season.

Recently, Real Betis has also become the first football club to join the commitment ‘The Climate Pledge’ by Amazon, accepting the challenge of taking decarbonization measures through real changes and innovation, which comprehend efficiency improvements, the use of renewable energies, material reduction, and other strategies aimed to eliminate its carbon emissions.

With the cooperation of specialized companies such as Ecoembes and Ecovidrio, the Club wants to undertake different waste separation and collection actions to create a recycling culture among its fans.

In normal conditions, Real Betis gathers around 50,000 fans in its Stadium in matchdays. The Club will promote different campaigns to motivate sustainable transport with electric vehicles, bicycles or public transport. The idea of ‘Forever Green’ is for fans to be the Club’s main allies in the fight against the climate crisis.

In line with this idea, the Club suggests several ecologic actions to create a greener planet. Some of these ideas are the creation of urban farms, reforestation, or actions to clean the River Guadalquivir.

In an effort to reduce its carbon emissions, the Club installed a LED lighting system at Benito Villamarín Stadium to contribute to energy efficiency. In the near future, solar panels will also be installed to generate photovoltaic renewable energy for self-consumption.

Additionally, Real Betis is a pioneer in the direct connections with LaLiga “web services.” Thanks to these processes, the Club has automatized and improved the services for its season ticket holders, as 67% of them renewed their season tickets online in previous seasons. This season has been 100% online, eliminating this way the impact generated by their transport. Furthermore, the Club has created the online season ticket, which allows to access the Stadium with the season ticket holders’ smartphone, eliminating paper in these operations, a system that will be used for single tickets, too.

Real Betis continues this way with its commitment in the fight against climate change, in line with the initiatives ‘Clime Neutral Now’ of United Nations and ‘The Climate Pledge’ by Amazon. The Club will continue working in a strategy to reduce the greenhouse gas emissions as much as possible and to create conscience among the population about the climate crisis.

The American agency Activista has contributed to build the platform. Activista is a creative company based in los Angeles committed to push social, cultural and economic change through the power of extraordinary ideas.