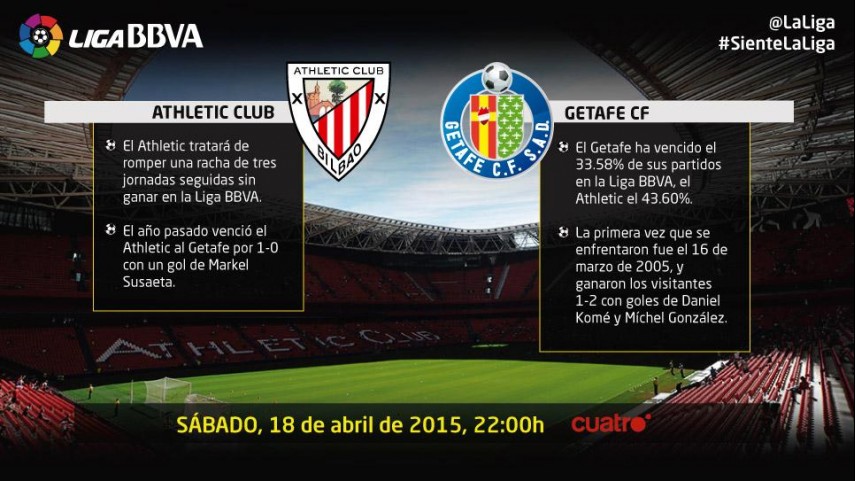 The Madrid side have picked up seven of the last nine points up for grabs, while Athletic have managed four good results in a row at home.

Getafe CF and Athletic Club meet on matchday 32 of the Liga BBVA for a showdown in which both teams will be putting each other’s good streaks of form to the test. Getafe, on the back of last weekend’s draw with Villarreal as well as victories over RC Deportivo and Elche CF, will be looking to shore up safety and move further away from the relegation scrap at the bottom of the table. Meanwhile, Athletic, who lie ninth, have not lost in San Mamés since 8 February and will be aiming to draw on their ground’s fortress status.

Óscar de Marcos is out for the home team after picking up a fifth yellow card last weekend. The Basques will also be without the injured Mikel Balenziaga. Edinaldo Gomes 'Naldo' will have to sit this one out for Getafe following his booking against Villarreal in the team’s last game.

Views from the dugouts

Ernesto Valverde used his pre-match press conference to speak about the upcoming opponents: "To inflict damage, the first thing we need to do is make the most of our chances". According to Valverde, the key to beating Getafe is "controlling the tempo of the game from the kick off". Elsewhere, on the topic of the Basque side, Pablo Franco stated, "they are an intense team, they’re very dangerous with dead ball situations and are very well organised at the back". The young coach believes that if his team manages "to turn it on in attack", they could come away from San Mamés with "a good result".