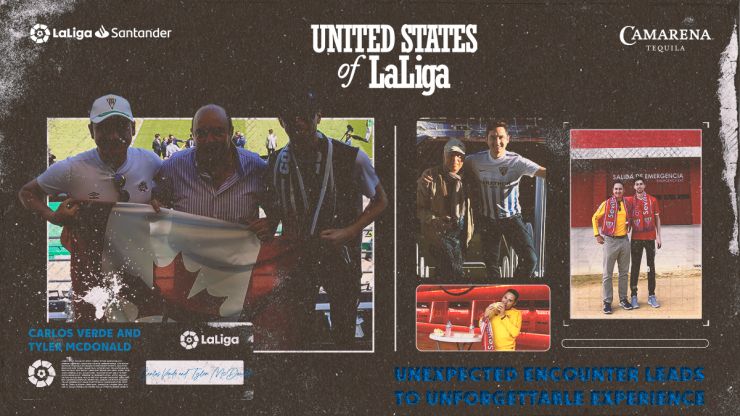 Carlos Verde and Tyler McDonald sat on the train from Seville to Córdoba trying to figure out how they would be able to acquire tickets to see Córdoba CF’s match against Huesca later that day.

Carlos Verde and Tyler McDonald sat on the train from Seville to Córdoba trying to figure out how they would be able to acquire tickets to see Córdoba CF’s match against Huesca later that day. The home side was fighting to stave off relegation from the Segunda División in May 2018, so tickets against Huesca, who eventually finished second and earned promotion to LaLiga, were hard to come by.

An elderly gentleman sitting behind them overheard their conversation and kindly told the visiting Canadians to meet him outside Estadio Nuevo El Arcángel just before kickoff. Wary yet optimistic, Verde and McDonald put their trust in the stranger.

“Ten minutes before the game this guy meets us with his entire family in tow and introduces himself as José Antonio Reyes’ father-in-law,” Verde recalls still in awe. “We sat in basically the family section right at midfield. They lost 4-2, but we saw José Antonio Reyes bury a penalty and he turned and gave a big fist bump to his family. That was ridiculous.”

The goal would be Reyes’ first and only for Córdoba and last in Spain as the winger/forward left for China the following month then tragically passed away in June 2019.

The once-in-a-lifetime experience was one of the highlights of a soccer-filled trip for the friends who grew up playing hockey together in Ottawa. For Verde, the trip was a way to celebrate and showcase his family’s Spanish heritage—his grandfather was from Seville—to his friend, while for McDonald, it was an unforgettable experience that furthered his LaLiga fandom.

“Football is the global game and it brings everyone together through sports,” McDonald says. “That’s a pure example of how it can do that. To have someone so high profile just give tickets and let these Canadians experience a Córdoba match is incredible.”

Their journey began on Friday evening in Seville at Estadio Ramón Sánchez Pizjuán where they watched the home side top Real Sociedad 1-0. The next day, they had their unforgettable experience with Reyes’ family. Joined by another friend on Sunday, the trio watched Verde’s favorite club Málaga lose 3-0 to Alavés before huddling under what cover they could find from the pouring rain as Rayo Vallecano defeated Granada 2-0 on Monday en route to winning the Segunda División.

“I saw Málaga seven times that spring and summer and they got one point from those games,” Verde says with a laugh. “It was a tough year to be a Málaga guy, but it was cool being able to go to so many games.”

Despite the results, the adventure was unforgettable for the life-long friends, who are planning another trip to Spain in the next few years, though this time with their significant others that will probably be a little more balanced between football and arts/culture/sightseeing.

“It was special. We’ll never be able to recreate that time in our lives,” Verde says. “There’s no better place to experience Spanish culture and LaLiga culture than Andalusia between Real Betis, Sevilla, Cádiz, Málaga. These are traditional clubs with diehard fan bases with phenomenal sights, smells and tastes. The trip was incredibly special and a memory we’ll have forever.”