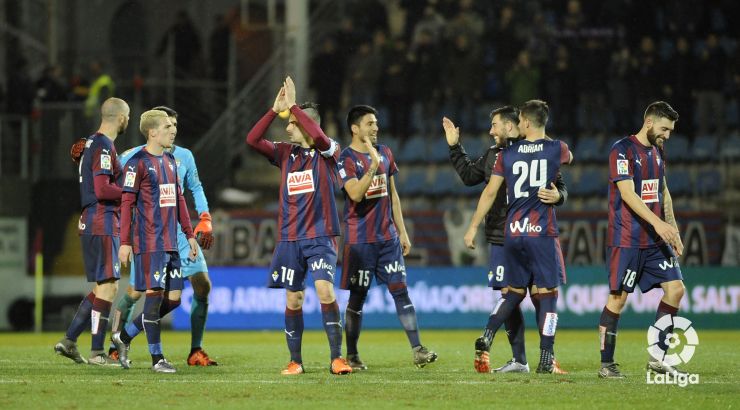 The DNA of Mendilibar's Eibar

What are the hallmarks of the current sixth-placed of Liga BBVA? We review the questions you can ask yourself about the game of the Armeros.

We have passed the first half of the season and SD Eibar don't move away from the European positions. The Armero club has secured nine wins and six draws in the first 20 games, figures that have allowed them score 33 points at this stage of the course and be placed in the sixth place.

Get to know closely the team coached by Mendilibar

- Who defends in the sixth team that least goals have conceded?
One of the first decisions of the Basque coach was to give the goal to Asier Riesgo, one of the summer signings, to the detriment of Irureta. The presence of the goalie from Gipuzkoa is helping the good defensive work of the Armero team that averaged just over one goal conceded per game, a figure that only five teams of the category can improve.

- Who are the fixtures in the Armero team starting lineup?
Besides Asier Riesgo, there are four other players that have exceeded the 1,400 minutes played in Liga BBVA. Capa (1,682 minutes), Dani Garcia (1,644), Mauro (1,594) and Escalante (1,472).
The first one, Ander Capa, has ceased to be an inside midfielder to become the irreplaceable right full back of the team. Dani Garcia and Escalante are fixed as a pair in the midfield, having played together in every game in which both have been available. And Mauro is the center-back most used by Mendilibar, probably because he has the best percentage in aerial duels, having won the 71% of them.

Which are their tactical options?
The Basque coach plays with two different alternatives when setting his lineups. He can choose to play with two strikers up front or strengthen the midfield introducing a third creative midfielder.
This last option tended to be the most used during the early stages of the course, but the success they have shown the two attacking references of the team has meant that Mendilibar is opting to play more often with a 4-4-2: Enrich and Bastón have played together in the first eleven of the team in 7 of the last 10 games. 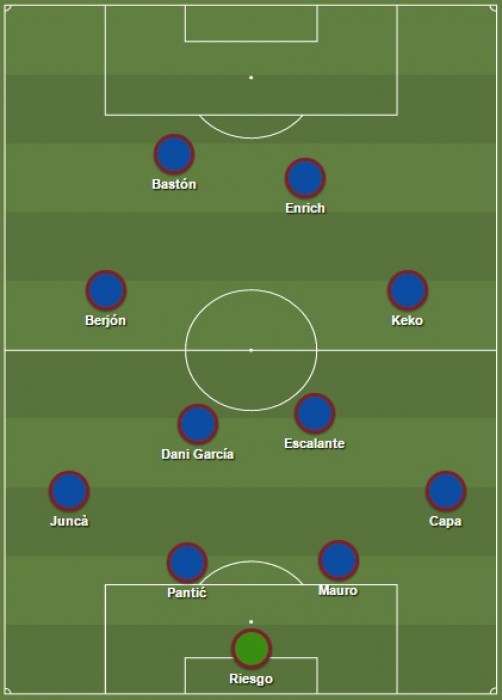 - Who are the play-makers?
If there are two players who are excelling in the creation of the attacking game, they are Keko and Saul Berjón. The two midfielders are capable to play close to the wing and comply with the defensive work that this requires, besides having a great quality to play in tight spaces and accuracy in the passes.
Adrian Gonzalez and Takashi Inui are two other players that Mendilibar can manage in his rotations for that purpose, while Simone Verdi also has many minutes in the center of the field when it comes to close spaces.

- Who are the target men?
The Basque club signed Borja Bastón and Sergi Enrich in the summer market, after the good performances of the two players last season in the Liga Adelante. And they were right. The coaching staff paid little attention to the limited experience of both footballers in Liga BBVA and time is proving that it was a great decision: Bastón has 12 goals under his belt and is the top scorer of the team ever in Liga BBVA, and has given also two assists, and Enrich has netted five goals and sums five assists.

An encouraging fact for the Armero team fans: historically, 11 of the 14 teams which have   secured 33 points after 20 matchdays have qualified for European competitions.