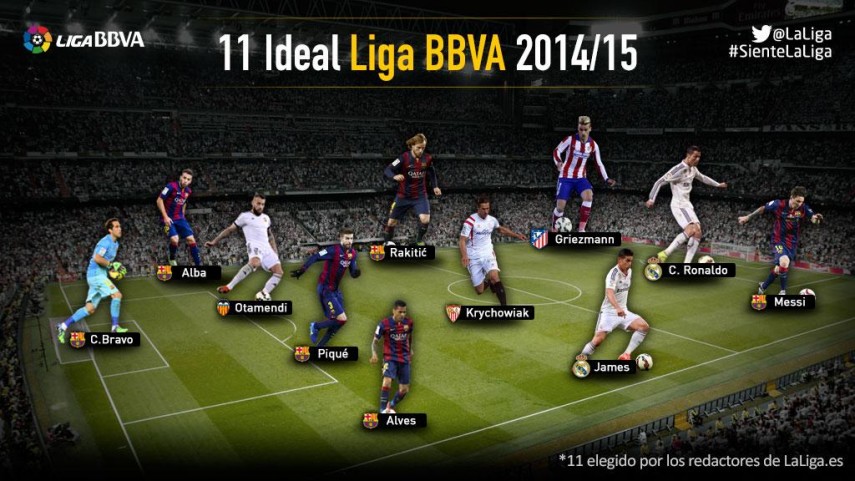 The writers at LFP.es have selected their Ideal XI from the Liga BBVA 2014/15 season and the team is coached by the winning manager Luis Enrique.

FC Barcelona with their great season that saw them win the Liga BBVA, are the real stars of the 2014/15 Liga BBVA Ideal XI chosen by the writers of the LFP.es website. Six members of the azulgrana side feature in the team on the season, that also includes players from Valencia CF, Real Madrid, Atlético Madrid and Sevilla FC.

This season Barcelona have had a safe pair of hands with Claudio Bravo in goal. The Chilean is the goalkeeper who conceded the fewest goals in the Liga BBVA, he only let in 19 goals in 37 games, good enough to make it into the squad of the year. Bravo has provided security and order for Barcelona in nets.

Barcelona’s good defensive work mean they also dominate in defence. Dani Alves at right back, Gerard Piqué in the centre of defence and Jordi Alba at left back are the three azulgrana representatives. They have carried out lots of containment work and also played balls from the back. However, they have also had a decisive role in attack, and have been key in providing security to Luis Enrique’s side.

The defence is completed with a Valencia CF. player. The Argentine central defender Nicolás Otamendi has become one of the most highly valued defenders in the Liga BBVA. Among his most outstanding attributes in his first season with Valencia, it is worth mentioning his contribution in attack, whereby he has notched up six goals.

Youth and talent are the main characteristics of the three players who have been named as the best midfielders in the Liga BBVA this season. The Polish Sevilla FC player, Grzegorz Krychowiak, has been a pillar for his side, as he has played a vital role in both attacking and defence for Unai Emery.

Another player who has found a place in the 2014/15 Liga BBVA Ideal XI is Ivan Rakitić. The FC Barcelona midfielder had a great season in his first year with the azulgrana side, where he has taken responsibility for directing play and organising the champion side.

Midfield is completed with the Colombian James Rodríguez. In his debut season in the Liga BBVA wearing the Real Madrid shirt, James has consolidated his status as a top level player. The figures prove it: his 13 goals and 13 assists this season have brought electricity and colour to the Whites.

Goals, goals and more goals are provided by the forwards in the Ideal XI chosen by writers at LFP.es. The leading Liga BBVA goal scorer, with 48 strikes, Cristiano Ronaldo, is one of the players selected for his great season. Joining him is the FC Barcelona top scorer, Leo Messi, who finished the season as the division’s second most deadly marksman, with 43 goals to his name. Completing the forward line is Atlético Madrid man Antoine Griezmann. The French forward played a key role for his team and his 22 goals helped the Vicente Calderón team towards a third-place finish in the Liga BBVA.

Luis Enrique Martínez, the FC Barcelona manager, has been chosen as coach of the year by the writers at LFP.es. The Asturian managed to win the Liga BBVA title in his first season in the dugout at the Camp Nou. He also won the UEFA Champions League and the Copa del Rey. In the Spanish league, he has notched up 30 wins, 4 draws and only 4 defeats; numbers that make him deserving of the award for best manager of the year.

Although they have not made it into the 2014-15 ideal team, there are several players who deserve a special mention for their great season. Valencia’s goalkeeper Diego Alves has been a key member of his squad, Diego Godín (Atlético Madrid), Javier Mascherano (FC Barcelona) and José Luis Gayá (Valencia CF) also played a crucial role in the defences of their respective teams.

Dani Parejo (Valencia CF) and Toni Kroos (Real Madrid) also deserved to make into a list of the season’s best midfielders. Lastly, the 22 goals scored by Neymar (FC Barcelona) and the 20 by Carlos Bacca (Sevilla FC) also make them deserving of a place in the team of the year, but they just missed out and will fight for it again when the league kicks off in August.