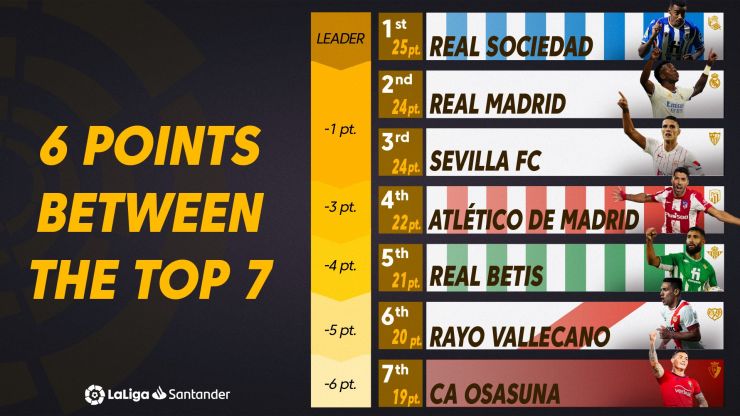 Excitement, fantastic football, and teams neck-and-neck. Seven teams are in with a shout of winning the title in what is becoming the most competitive campaign in living memory.

However, this closely-fought title race is nothing new. In the 2019/20 season at one stage there were 13 teams separated by five points. FC Barcelona led the table on 22 points, tied with Real Madrid and Real Sociedad, while Valencia CF were in thirteenth position on 17.

Real Sociedad have stayed top of the league for a third matchday in a row following their draw against local rivals Athletic Club, but sit only a point above Real Madrid and Sevilla, who are hot on their tails. Yet we can’t forget about teams such as Betis, Rayo Vallecano and Osasuna in the fight for LaLiga Santander glory. All three have shown themselves of being more than capable of standing up to the big boys and are shining examples of how competitive the Spanish top flight is.

This makes LaLiga Santander the most closely-fought out of the five major European leagues: England, Italy, Germany, France and Spain. None of these competitions feature such a narrow points gap at the top of their divisions.

Throughout LaLiga history we’ve witnessed thrilling conclusions to seasons, with trophies often being won on the final matchday. The most recent example of this is last season, in which Atletico de Madrid were crowned champions after overcoming Real Valladolid away from home. We could also mention the 2002/03 campaign, when Real Madrid and Real Sociedad fought for the title until the bitter end. What will happen this season? While it’s impossible to predict, there’s one thing we know for sure: it’ll be on- the-edge-of- your-seats exciting!