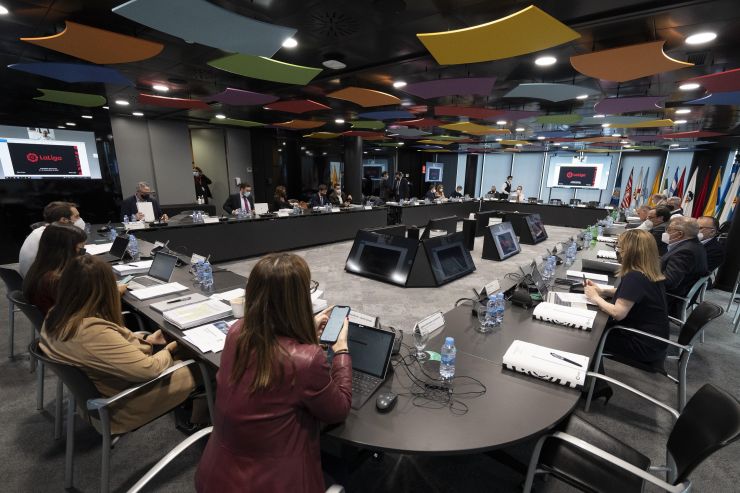 The fourteen clubs that make up the LaLiga Executive Committee (Comisión Delegada) have given their unanimous support for the definitive agreement with CVC. The agreement will be presented to the 42 clubs at the LaLiga General Assembly on December 10.

Following the mandate established at the General Assembly held on August 12, the 14 clubs that make up the LaLiga Executive Committee (Comisión Delegada) have today unanimously ratified their support for Boost LaLiga (LaLiga Impulso), the agreement reached with global investment fund CVC to stimulate the growth of LaLiga and its clubs.

The Boost LaLiga agreement, which was unanimously approved last August, has been adapted to the participation of 39 of the 42 LaLiga clubs. This adjustment does not affect the overall valuation of LaLiga, which remains at 24.25 billion euros. The definitive agreement will be presented for ratification by the General Assembly convened for December 10.

After this change, Boost LaLiga delivers an investment of 1.994 billion euros that will provide the participating clubs with the necessary resources to undertake growth projects from a sporting and business point of view. As announced at the time, LaLiga will keep its sports responsibilities as well as the organization and management of audiovisual rights sales.

The new formulation guarantees that non-participating clubs will not be impacted. For the rest, this injection of more than 1.990 billion euros commits the clubs to allocating up to 70% of the resources to investments linked to infrastructure, international development, brand and product development, communication strategy, innovation and technology, and a content development plan for digital platforms and social networks, with 15% available for the signing of players and the other 15% for debt relief.

As a sign of commitment, many clubs have already sent LaLiga their "Club Development Plan" detailing the use of the funds as well as the investment projects and specific growth initiatives for the club.

The clubs involved in the Executive Committee have taken a very positive view of the Boost LaLiga agreement. For Amaia Gorostiza, president of SD Eibar, "In addition to the significant financial injection, the Fund's knowledge of the sector will allow the clubs to develop strategic projects which will guarantee our future growth. We believe it's vitally important that all of us in the clubs are moving in the same direction alongside LaLiga and in conjunction with a partner such as CVC, as this will be of benefit to the competition itself. We have no doubt that with this agreement LaLiga will be stronger and more profitable, and therefore the clubs will benefit from it."

The agreement comes at the ideal time, as Sevilla FC Vice President Jose Mª del Nido Carrasco pointed out: "Beyond the specific projects that we want to develop in our club, from our point of view this is a strategic agreement that comes at a crucial moment because now is the time when we really have to boost our competition to continue growing in an increasingly complicated context."

In the words of Miguel Angel Gil Marin, CEO of Atletico de Madrid and first vice president of LaLiga, "For LaLiga and its clubs the agreement with CVC is an opportunity to adapt current facilities to the demands of a very competitive and expanding market. This agreement will allow us to improve our infrastructures and adapt them to new technologies in order to offer new content in different formats and with improved quality standards. In addition, investing in technological resources - both technical and human - will give us the opportunity to reach a greater audience and offer a wider range of services and more content."

Javier Fernández, president of Real Sporting and second vice president of LaLiga, expressed himself along the same lines: "In the coming weeks the documentation will be completed in order to close an historic agreement for Spanish football. Now is the time to lay a solid foundation for the future with the growth of LaLiga and the clubs that have been part of its tremendous evolution in recent years. The maturity of LaLiga and those of us who form it will be reflected in the exciting projects that we will carry out to modernise our infrastructures, diversify our sources of resources and allow us to move closer to our fans, both in our communities and in the rest of the world."