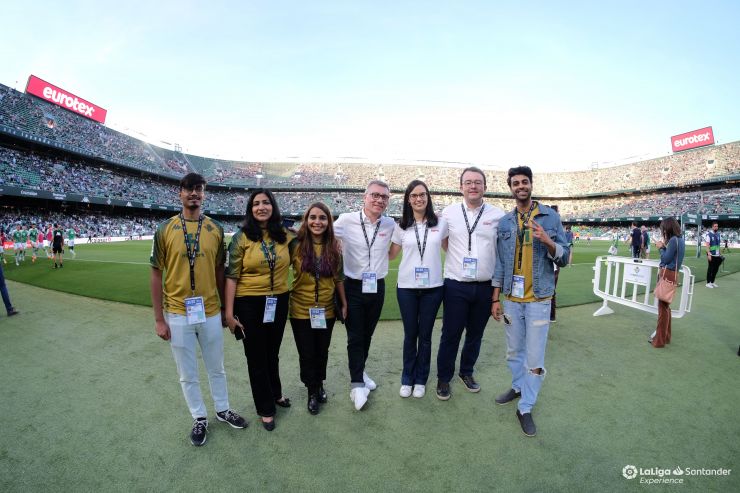 After enjoying a whole host of activities during their visit to Seville, the guests from ESPN Brazil and India’s VIACOM18 headed to Real Betis’s stadium to take in an unforgettable atmosphere and match between Los Verdiblancos and the Catalans. It was the icing on the cake following a wonderful few days’ stay in the Andalusian capital.

As soon as they reached the stadium they were able to see the Betis team bus arrive and greet the stars of the show. In addition, former player, ex-club president and all-round Betis icon Rafael Gordillo gave the guests gifts as a souvenir of their experience. What’s more, Indian guest Dhenuka Ganesh, who won the series of the challenges as part of LaLiga Experience, was awarded a special prize.

Before the match kicked off, our guests headed down to pitchside to watch the players warm-up from up-close. It was then time for them to take their seats and, from one of the most privileged vantage points in the stadium, they drank in the atmosphere created by the diehard Betis fans, who more than won over the Brazilians and Indians in attendance. While the hosts ultimately didn’t manage to win the game, our Experience guests never ceased to get behind Betis, and were also given the chance to meet club mascot Palmerin, take photos on the pitch and, in the case of ESPN Brazil, broadcast live from the ground.