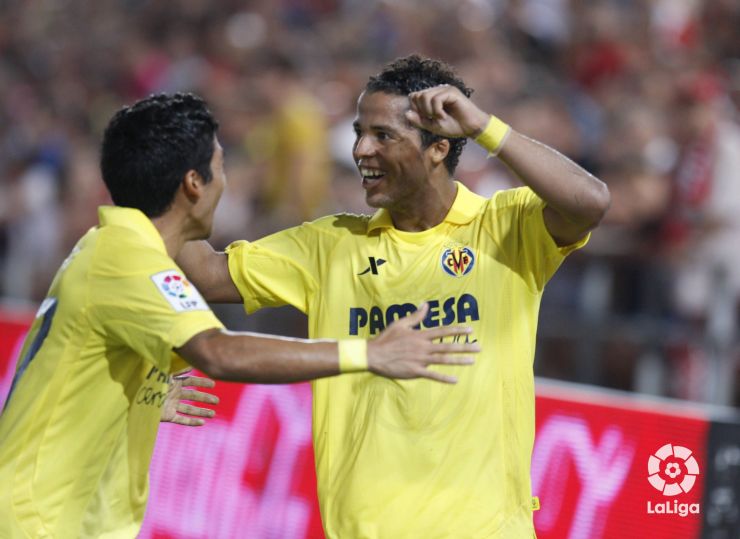 Giovani: "I think we've been the surprise outfit"

Giovani dos Santos spoke to LFP.es about Villarreal's achievement of qualifying for the Europa League after gaining promotion last year.

Villarreal CF attacker Giovani dos Santos is having a great season in Liga BBVA. Against Málaga CF in round 34 of games, he made it 100 appearanced in the competition and is a key player for The Yellows, who following last Sunday's game against Sevilla FC confirmed their place in the UEFA Europa League next season.

LFP.es spoke exclusively to the 24 year-old Mexican, a forward who has 10 goals and seven assists to his name this season, which have helped Marcelino García Toral's men to chieve their dream of qualifying for Europe just a year after gaining promotion to Liga BBVA.

LFP.es: Firstly, congratulations on making it 100 games in Liga BBVA against Málaga in round 34. What does it mean to get to that number?

Dos Santos: It's a lot of games in Liga BBVA, and I'm proud to have got to 100 games in the world's best league. Despite the fact I've got to this number, I'm young and have time and margin to improve. I have to carry on working hard to improve as a player and hopefully I can carry on racking up the games.

LFP.es: Since you made your debut with FC Barcelona on the 2nd of September a lot has happened. What do you remember about this game?

Dos Santos: I was nervous, and anxious about making my debut. I remember that we had a good pre-season, I was confident, I knew the players and they accepted me. It was against Athletic Club and I came on for Thierry Henry. It is a unique experience to make your debut in one of the best sides in the world, and it made me so proud.

LFP.es: You played 28 games in Liga BBVA for Barça, a number you equalled with Villarreal against the Catalan club in the 35th round of games. How was the game?

Dos Santos: They're always special games. Irrelevant of the fact I've played there, for any player to take on Barcelona is a pleasure. They're games you try to enjoy to the max because it's not everyday that you play against the world's best. Barça have won everything and playing against them is something special.


LFP.es: You played under Marcelino García Toral at Real Racing Club. How would you describe him as a coach? What was he like then and what is he like now?

Dos Santos: He's a coach to whom I'm grateful for the support he has shown me throughout my career. It's like a footballing father to me. He knows how to get the best out of me and I think under him I can grow. This season we've done a great job and hopefully I can be under his orders next season to carry on improving.

LFP.es: You've scored 10 goals, your best return in a single season, and laid on seven goals. Is this your best campaign to date?

Dos Santos: I think with regards to my numbers, stability, games and minutes, it has been my best season. It's the first year I've played a lot and I feel really good. Although I don't think that I've reached my ceiling and hopefully next season I can do even better.

LFP.es: At the weekend you confirmed your spot in the UEFA Europa League for next season. How did it feel?

Dos Santos: We celebrated. We're lucky enough to be in Europe, something that's come throught hard work and sacrafice after getting promoted from Liga Adelante, with a young side. The objective was to stay up and I think we've been the surprise outfit. To be in Europe is gratifying and hopefully we can enjoy it next season.

LFP.es: Now the season is on the verge of ending, and given the fact last year you were in Liga Adelante and are now in Europe, how would you evaluate this season?

Dos Santos: We'vee had a very good season. We've shown a good brand of football, very few sides have been better than us this season. We've gone head to head with the big sides and against those who have been fighting alongside us. We've played good football, been competitive and in general given off a good image this season.