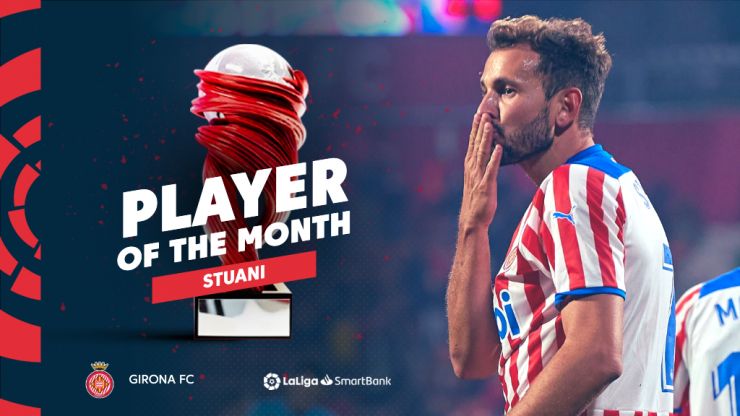 The Uruguayan striker's five goals in December were enough to scoop the award, as club Girona FC won three matches out of four to move up to the play-off spots in LaLiga SmartBank.

Christian Stuani has been named as LaLiga SmartBank Player of the Month for December. The Girona FC striker has hit goalscoring form to help lift the Catalan side into the play-offs following a positive string of results in the past month.

Girona FC ended 2021 in great form, not losing a single game in the month of December (three wins and one draw). With five goals in those four matches, Christian Stuani has shown once more just how important he is to Michel's team. He hit doubles against both CD Leganes and Burgos CF at Montilivi, earning three points in both encounters for his side. He also found the net against UD Ibiza in a 1-1 draw away from home.

At the age of 35, he remains one of the most prolific scorers in LaLiga SmartBank, where he currently sits top of the goal rankings with 14 strikes. As club captain, he's a key man for a Girona FC outfit looking to earn promotion back to LaLiga Santander after three seasons in the second tier.

The award is Stuani's first of the season. He follows on from November winner Fernando Martínez (UD Almeria), beating off competition from Pablo Valcarce of Burgos CF and CD Tenerife's Elady.