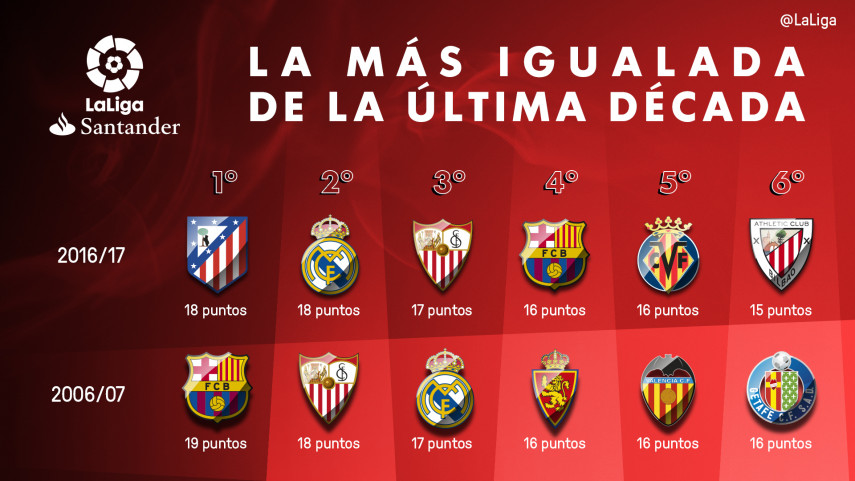 Only three points separate first and sixth in LaLiga Santander

You have to go back 10 years to find a similarly crowded top of the standings after only eight rounds of matches.

Excitement, goals and competitiveness – particularly in the higher reaches of the table – have been in plentiful supply at the start of the LaLiga Santander campaign. Indeed, the competition is in rude health and, by the looks of things, we could be set for one of the most thrilling title races of recent years.

Three points separate the top six at present. Atletico Madrid are on a superb run of form and currently lead the way, but they will know better than to get too comfortable, conscious that Real Madrid, Sevilla FC, FC Barcelona, Villarreal CF and Athletic Club are snapping at their heels.

Not since the 2006/07 season has LaLiga been so tight in the upper echelons of the table. You have to go back precisely 10 years to find the last time there were only three points between the sides in first (Barcelona) and sixth (Getafe).

No other major European league can boast such a narrow points difference towards the top of the league standings, which is an added incentive to keep right up to date with the latest action from Spain's top flight each weekend. There are four points separating the top six in both the Premier League and Bundesliga, while the figure stands at eight in Serie A and nine in Ligue 1.

What's more, Atletico, Real Madrid, Sevilla, Barcelona, Villarreal and Athletic have racked up an astonishing 112 goals between them in the first eight games of the season, a figure that dwarfs the rest of Europe in a clear demonstration of the top LaLiga Santander clubs' relentless goalscoring prowess.