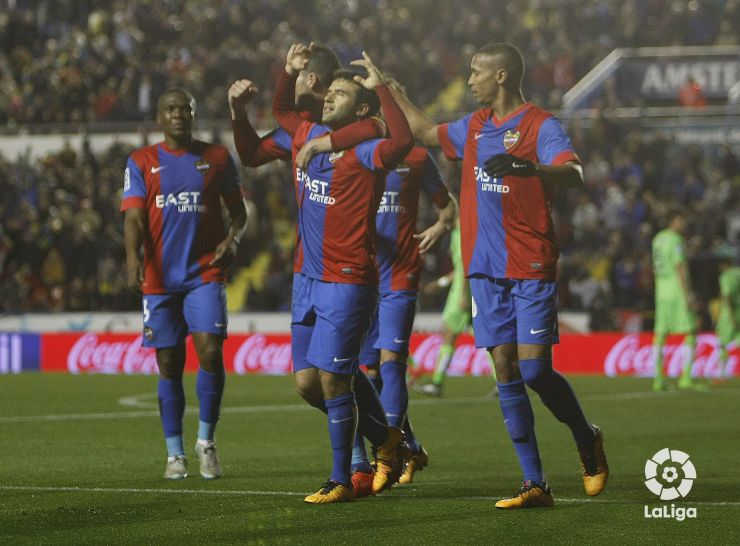 January saw Levante's ranks boosted by five fresh recruits which appear to have turned the tides for the Valencia-based club. An air of positivity is once again blowing at the Ciutat de Valencia and Levante has spent the beginning of the year watching its recent additions go from strength to strength and showcasing their skills on the pitch.

Rossi was one of the most hotly anticipated arrivals among the Levante faithful. And it has only taken the talented Italian forward five games to prove his worth. Providing frequent glimpses of his quality right from his first run out for the team against UD Las Palmas, he has already bagged himself two goals: one against Getafe CF and another against Sevilla FC. Having linked up perfectly alongside Deyverson and Jose Luis Morales, the three now form a trident that look set to give the Levante crowd something to shout about.

The Catalan came out of the blocks against SD Eibar and, despite a defeat for Levante, it was a promising start for Verdu. That early potential was confirmed last weekend in the game against Getafe, in which he claimed his new team their third goal of the night. After two performances, the fans have reason to feel optimistic and their faith in his talent is growing. The more he plays, the better he gels with Simao Mate and Jefferson Lerma.

Another promising winter signing also stepped into the spotlight during the Getafe showdown. Making his debut against the Fran Escribá side, Medjani gave a very good account of himself in front of his new club's home crowd. The Algerian player excelled in fighting for the ball and responded perfectly when the opposing team went on the offensive. His performance prompted good vibes all round, hinting at a happy partnership with the Granotas.

Levante are also hoping for great things from Lucas Orban, who has come in on loan from Valencia CF and will boost Levante's back line for the remainder of the season. The Argentine player is known for his versatility but his intensity and delivery also have the Ciutat de València fans chomping at the bit.

Having landed in Valencia on 7 December, he made his Liga BBVA debut against Rayo Vallecano on 10 January and is making progress and winning the fans over match by match. One of the great Colombian future hopes, Cuero comes to showcase his talent with Levante in Spain fresh from making a splash in Argentine football.

Keep up with all the latest from Levante here.