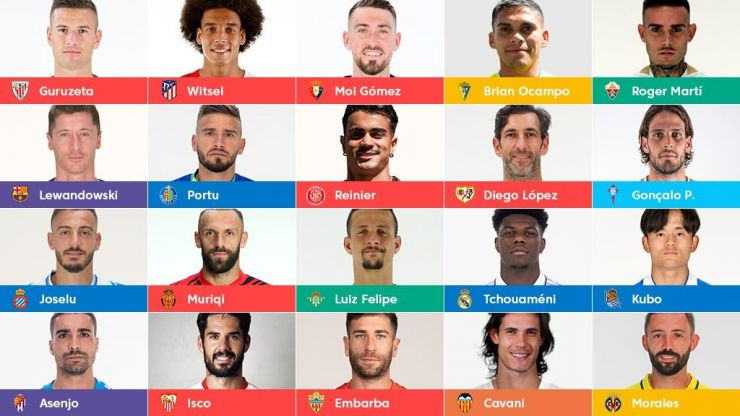 How the 2022/23 LaLiga Santander transfer window played out

Lewandowski, Tchouameni, Cavani and Witsel were amongst the new recruits who grabbed the headlines in the summer transfer market in the Spanish top flight.

The 2022/23 LaLiga Santander summer transfer window has now slammed shut and, just like every year, there was no shortage of excitement right up until the last minute as the 20 top-tier clubs made a total of over 160 signings.

Amongst those on the move were some familiar faces who check back into the competition, including Ander Herrera (Athletic Club), Pepe Reina (Villarreal CF) Carles Perez (RC Celta), Samu Castillejo (Valencia CF) and Sergio Reguilon (Atletico Madrid).

Meanwhile, LaLiga Santander also welcomes a host of stars of the world game, such as Valencia CF recruit, Edinson Cavani; Real Madrid new boy, Antonio Rudiger; while Axel Witsel will turn out for the Rojiblancos and Robert Lewandoski will be out to fire FC Barcelona to glory. Indeed, the Polish
sharpshooter has already showcased all of his goalscoring prowess, notching four goals in his opening three outings to establish himself as the early front runner in the league goal charts. The former Bayern Munich goal-getter promises to be one of the competition’s top summer signings.

Valladolid were also active during the window, with Pacheta attracting Granada’s Sergio Escudero to the Jose Zorrilla, along with the vastly experienced Sergio Asenjo, who returns to his former stomping ground and Zou Feddal, who is back in the Spanish top flight following a stint in Portugal. Another side who did plenty of business were UD Almeria, where 11 players came through the door. Some of the Andalusians’ recruits know a thing or two about the Spanish top tier, including former SD Huesca man, Gonzalo Melero; ex-RCD Espanyol ace, Adrian Embarba; and Leo Baptistao, who is back on familiar territory following time spent abroad.

A number of the division’s clubs have also looked to the future by bringing in some fine up-and-coming talent, with CA Osasuna securing the services of Abde in a loan deal, while Take Kubo will strut his stuff for Real Sociedad. Elsewhere, Barça’s Nico Gonzalez heads out to Mestalla looking to gain some all-important game time and Tchouameni will be keen to make his mark at Real Madrid. The trio have already had their first taste of action this term and have proved that they boast the quality required to perform on the biggest stage.

Other deals that went through during the window will allow LaLiga Santander
followers to continue to enjoy the considerable talents of Jose Luis Morales and Johan Mojica (Villarreal), Munir, Borja Mayoral, Luis Milla and Cristian Portugues (Getafe CF), while Muriqi has extended his stay at RCD Mallorca and Ruben Alcaraz and Fede San Emeterio will continue to shine for Cadiz.
Elsewhere, Umar Sadiq and Brais Mendez checked in at Real Sociedad and attacking aces Adnan Januzaj and Isco will be aiming to hit the ground running for Sevilla FC. The Azulgranas have strengthened their backline by signing Jules Kounde and Hector Bellerin, whilst other players settling into new surroundings are Joselu Mato (Espanyol), Roger and Carlos Clerc (Elche CF) and Salvi Sanchez and Diego Lopez (Rayo Vallecano).