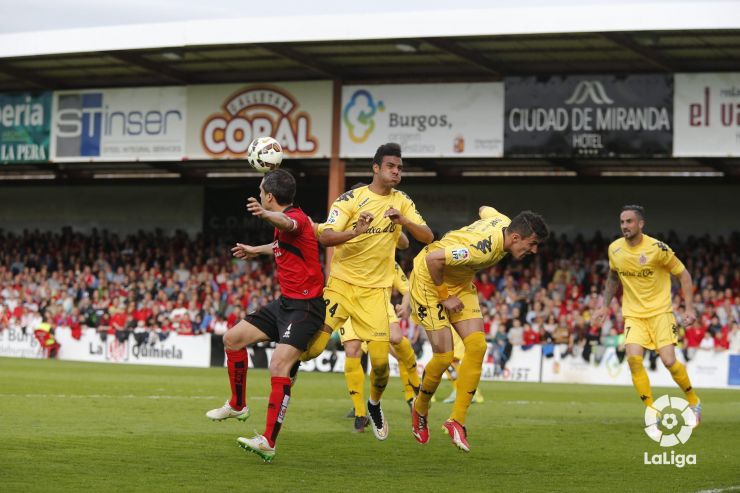 A single goal from the captain of the Catalan side gives them a win against an impulsive but inaccurate Mirandés side.

Girona FC got back to winning ways with a 0-1 win against CD Mirandés on matchday 31 of the Liga Adelante. A single goal from Richy gave the points to Pablo Machín’s side, and they continue their battle for direct promotion.

The match was hard fought at the beginning, with both sides trying to be dominant. There were barely any chances and the midfield saw most of the action in a game where the goalkeepers were almost mere spectators. Girona’s goal arrived with practically the first shot on goal. Richy hit a free-kick with a powerful shot that Imanol Elías could not reach. After that blow, Mirandés tried to react with a lot of impetus, but the visitors, well placed and closing down the home side as they tried to move the ball out from defence, tied down Carlos Terrazas’ men. The Catalan side went in at half-time with the score at 0-1.

After the break, Mirandés had most of the action in the match, but were unable to do much damage to a solid Girona side. The visitors, with Isaac Becerra acting as a very safe pair of hands in goal, cancelled out any of the home side’s chances. Even so, Álex García could have got the equaliser with a shot that went wide. The tactic of Mirandés was to put in balls for Urko Vera to shoot. The Basque forward managed to get shots off, but without creating any danger. On the other hand, the Catalans tried to kill off the game on the counter attack, and they could have managed it with chances from Aday and Fran Sandaza, but their shots went wide. In the end the points went back to Girona, as they got their first win in four games.