These are the 11 players who racked up the highest number of points on Matchday 24 of the 2017/18 league campaign.

LaLiga Santander Matchday 24 has come to an end and it's time to take a look at this week's LaLiga Fantasy MARCA Best XI, a lineup featuring players hailing from eight different clubs, headed by three from Girona FC.

The Player of the Matchday honours, however, go to Getafe CF striker Angel Rodriguez, whose double against RC Celta and overall stellar performance during his club's 3-0 drubbing of Los Celestes at the Coliseum earned him an impressive 18 points.

Girona shotstopper Yassine Bounou (10) takes charge of the Best XI goal this time around, after keeping a spotlessly clean sheet during his team's stunning victory over CD Leganes. 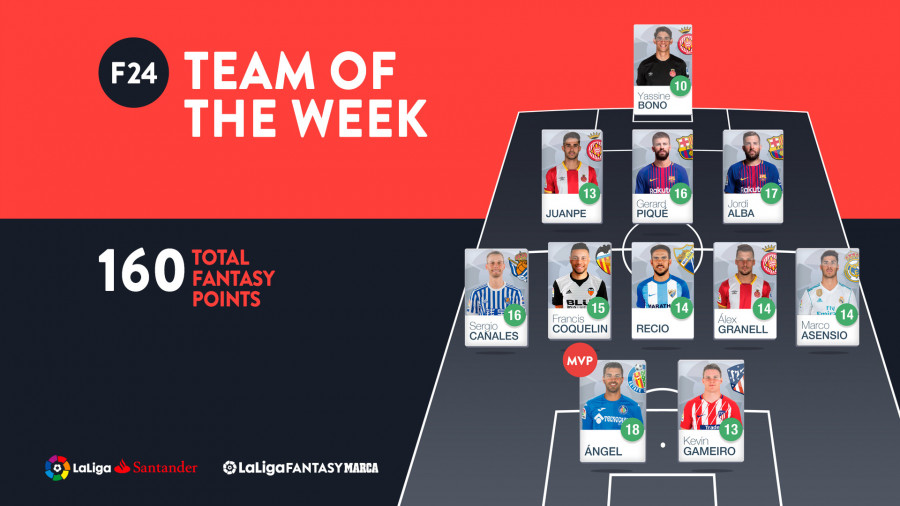 The backline is made up of players from two different teams: Girona's Juanpe (13) and FC Barcelona's Jordi Alba (17), who were on target against Leganes and SD Eibar respectively. Joining them is Alba's Barça teammate Gerard Pique (16), who put in a fine display and helped the Catalans keep the Basques at bay at Ipurua.

The midfield features a total of five players, with the top points going to Sergio Canales (16) for his superlative side-stepping goal during Real Sociedad's victory against Levante UD. He is joined by Francis Coquelin (15), plus Alex Granell, Recio and Marco Asensio, who bagged 14 points apiece.

The LaLiga Fantasy MARCA Best XI's attacking duo on this occasion has netted a total of three goals between them. First up, Angel, our Player of the Matchday (18 points) struck a brace against RC Celta, while the Frenchman Kevin Gameiro (13) scored the all-important opener in Atletico Madrid's crucial win over Athletic Club at the Wanda Metropolitano.

Don't have a LaLiga Fantasy MARCA team yet? Awaken your inner coach by downloading the game, create a league with friends or sign up to the public leagues and get competing with other like-minded lovers of Spanish football. The game is available on mobile devices and tablets and can also be played online via Facebook.