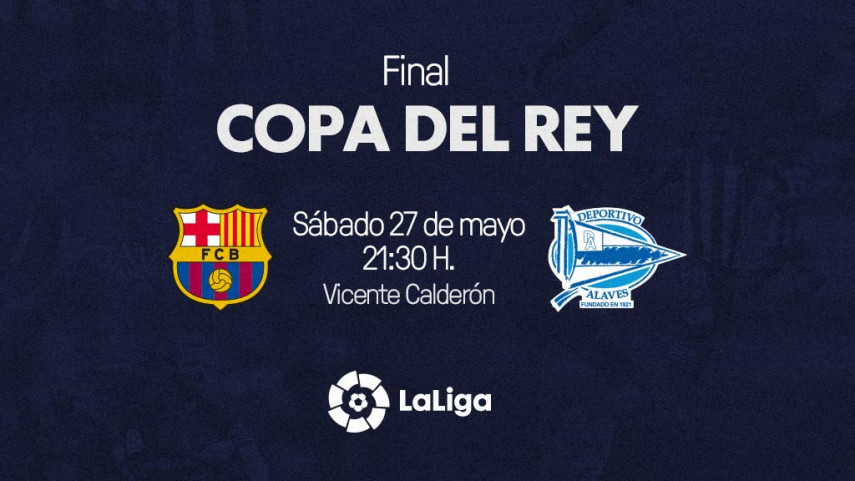 The Copa del Rey final at the Vicente Calderon gives both clubs the chance to round off the season in style on Saturday.

Now that the LaLiga Santander campaign has reached its conclusion, all eyes are on the Copa del Rey final, which brings the curtain down on a domestic season filled with goals, emotions and fantastic football. FC Barcelona and D. Alaves face off with a major trophy at stake, combined with the potential honour of winning the final competitive match staged at the Vicente Calderon.

Los Azulgranas, who took the race to win LaLiga Santander down to the wire, are now intent on lifting the cup for a third straight year. If they are to achieve that feat, however, they will have to do so without the suspended Luis Suarez and Sergi Roberto.

The match takes on added significance for Luis Enrique, given that it is the 47-year-old's final bout in charge of the Catalan giants. "Luis Enrique deserves a fitting ending, he is one of the best coaches in the club's history and deserves to leave with a trophy. We'll do all we can to produce a great performance and I'm convinced you'll see our passion out on the pitch," explained Gerard Pique in his pre-match press conference.

Alaves, meanwhile, head into the final hoping to conclude what has been a wonderful season, as shown by a ninth-placed league finish, by putting the icing on the cake in the shape of bringing Barcelona's imperious cup streak to a grinding halt. The Basque outfit can certainly take confidence from the fact thatthey ran out victorious in the league with a memorable 2-1 win at the Camp Nou back in September.

It is the combination of strength, exciting youngsters and the guiding hand of the more experienced players that makes Alaves such a tough proposition, with coach Mauricio Pellegrino receiving plenty of plaudits for the team's impressive displays in LaLiga Santander. "We're fully focused and feel strong as a team. We're ambitious and believe we've got a chance. We're thrilled to be in this situation, we're trying to enjoy every second of the build-up and we can't wait for the game," explained club captain Manu Garcia.