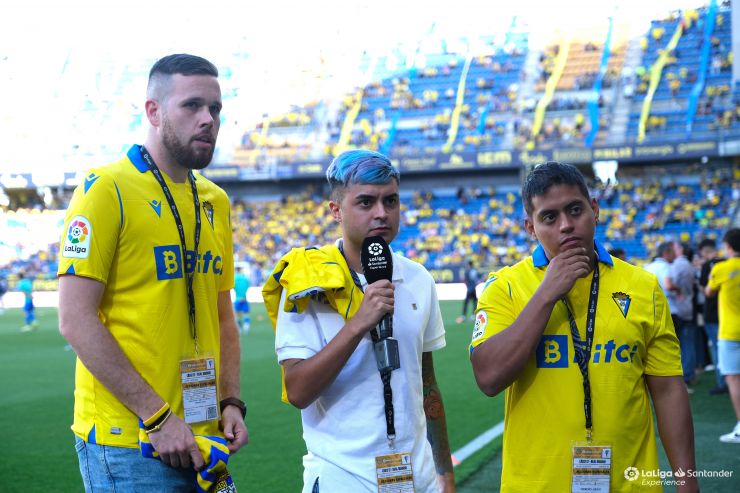 It was then time for the match, and the city of Cadiz and its inhabitants pulled out all of the stops in support of their team as they sought to achieve LaLiga survival against the might of Real Madrid. The LaLiga Experience guests couldn't have asked for a better climax to an unforgettable trip.

In the morning, influencers Markito Navaja and El Mindo, as well as journalist Manuel Olivari, embarked on a tour of the city which culminated in them taking in the beauty of La Caleta beach. Markito Navaja then showed Colombian El Mindo how to prepare maté, the classic Argentine beverage, to boost their energy levels ahead of the rest of the day.

The VIP guests arrived at the Nuevo Mirandilla two hours before the match, and the atmosphere in the environs of the stadium was already palpable from the moment they stepped off the bus. The streets of Cadiz were a sea of yellow shirts, with fans conjuring up a deafening roar of chants and songs in their bid to give their team a head start on the pitch.

Once LaLiga Experience’s invitees entered the stadium, club legend Pepe Mejias presented Markito Navaja with a trophy for his efforts in the challenges he took part in leading up to the matchday, in which the  DIRECTV influencer came out on top over NOVA SPORT and El Mindo.

With the gift-giving ceremony concluded, next came the moment they’d all been waiting for – getting an up-close view of the teams as they took to the pitch! The guests were able to watch Cadiz and Real Madrid be cheered onto the pitch and warm up before the match got underway.

The hosts were left shell-shocked after Mariano Diaz opened the scoring with only five minutes on the clock, with the Dominican finishing off a lovely move by Rodrygo. However their disappointment was to be short-lived as Ruben Sobrino equalised with a stunning effort before half time, sending the Nuevo Mirandilla into raptures. LaLiga Experience’s guests enjoyed a thrilling match and headed home with a whole host of memories to cherish.