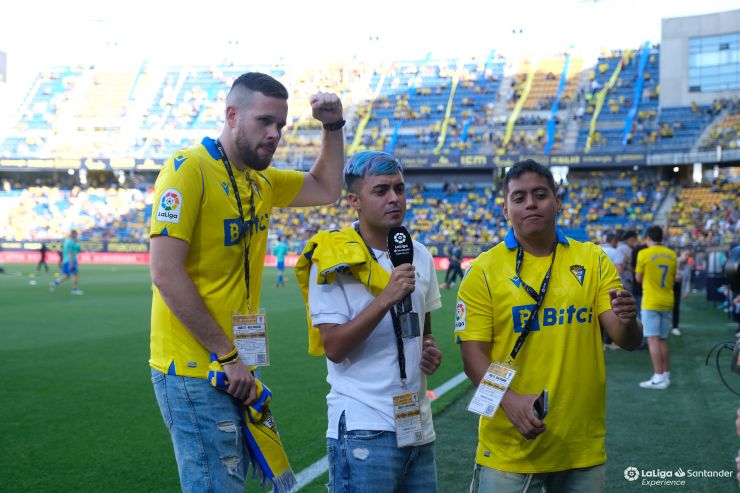 A weekend packed with challenges… and bags of fun!

We lined up a series of fun-packed challenges for the guests of the LaLiga Experience in search of the Top Winner in the final instalment of the season.

The LaLiga Experience arrived in Cadiz with plenty of surprises in store for the guests of DIRECTV (LATAM) and NOVA SPORT  (Czech Republic). While they explored the magical streets of the Andalusian city, we put Markito Navaja (Argentina) and El Mindo (Colombia) to the test with several challenges.

The Cádiz CF training ground bore witness to the DRIBBLE challenge. Markito and El Mindo faced a test on Cadiz and Real Madrid, dribbling in one direction or another based on their answers. Both of them were so on the ball that it ended in a draw!

With a point apiece, they faced the second challenge in a special setting: the Nuevo Mirandilla stadium. The DIRECTV presenter, Manuel Olivari, was tasked with launching the speed and knowledge test on the two clubs from a privileged pitch-side location. El Mindo finally emerged victorious.

Then it was time to turn up the heat, with Markito and El Mindo battling it out to see who could cook the best paella. Argentina savoured a delicious victory, putting the scores back level.

The influencers headed into the final challenge tied for points and what better place than La Victoria beach to settle things? The challenge consisted of scoring a goal from four different distances without the ball touching the sand. It was a hard-fought contest, but the left peg of Markito Navaja produced the goods.

The matchday could not have had a better climax. The Cadiz CF legend Pepe Mejias awarded the Top Winner trophy to Markito Navaja, while the rest of the LaLiga Experience guests took home some wonderful memories.