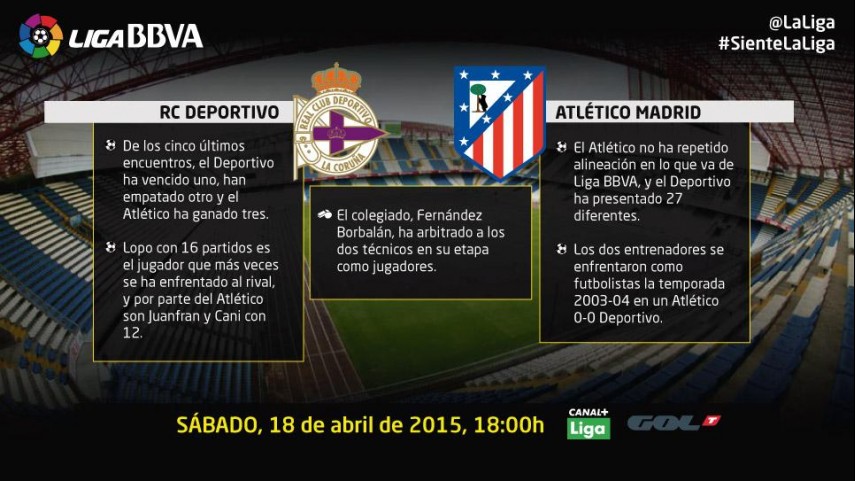 Deportivo host Atlético in a battle between two teams with contrasting objectives: the Galicians are looking to move away from the relegation zone, while the rojiblancos want to stay in third place.

Matchday 32 in the Liga BBVA throws up an enticing duel between RC Deportivo and Atlético Madrid. The hosts go into the match after battling their way to a 2-2 draw against Real Sociedad in their first match under new coach Víctor Sánchez del Amo, which took them on to 28 points and out of the relegation zone. The Madrid side meanwhile occupy third place but cannot afford another slip up after drawing 2-2 at Málaga last week, as Valencia CF and Sevilla FC are hot on their heels.

Depor midfielder Celso Borges misses the game after picking up an injury against Real Sociedad, while Atlético are without Mario Suárez and Mario Mandžukić through injury and Gabi Fernández due to suspension. However, Cani, Cristian Ansaldi and Raúl Jiménez have been named in Simeone's squad.

View from the dugouts

Víctor Sánchez del Amo is gearing up for his first game in charge of the club at the Estadio de Riazor. The young coach spoke about his feelings on returning to the ground where he was a roaring success as a player. "It's going to be a very special moment but it's not going to distract us in any way at all from the job we have to do," he said. Sánchez del Amo also called Atlético "a super team" but insisted that his team "feel ready for the match" despite the rojiblancos' strengths.

His opposite number Diego Simeone was full of praise for Deportivo despite their position in the table. He said: "Deportivo are a brave team with a very organised defence, that are good at dead balls and are strong on the second ball. This is one of those classic matches against a team that is fighting to not go down and that will demand that we are at our very best."