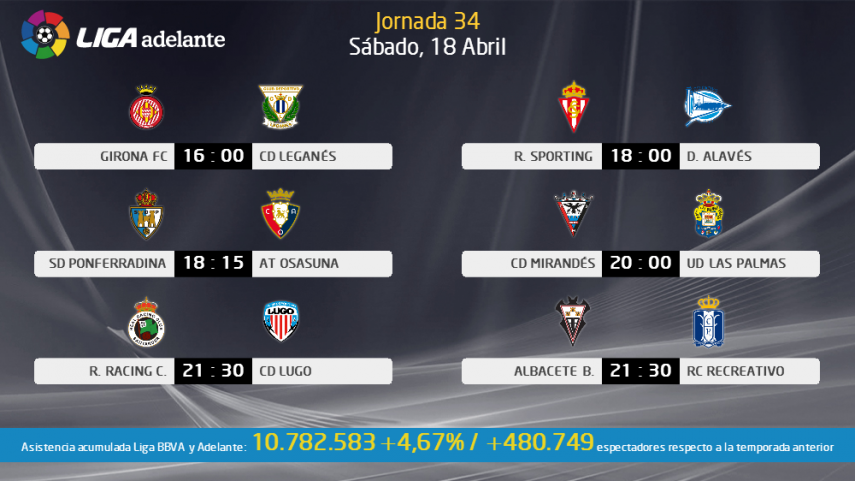 Girona, Sporting and Las Palmas will fight for the automatic promotion places while Osasuna, Racing and Recreativo are battling to escape the drop zone.

Matchday 34 in the liga Adelante kicks off with this match between the Catalan side and the Madrid club. Girona, fourth in the table, will keep fighting to make it into the top two spots that would see them automatically promoted to the Liga BBVA. However, they are up against a Leganés side who picked up a home win in their last outing and are comfortable in 10th place in the league.

Pablo Machín, coach of Girona, called Leganés "one of the most in-form teams in the league". But he added: "We aren't focusing on who we are playing, we just see them as a team that we have to show we are better than. We aren’t afraid of anyone."

The rojiblancos have only been able to draw their last three matches in the Liga Adelante and will be looking for a win at last when they host Alavés. The Gijón side will fight with all their might to take the three points that would take them back into the automatic promotion spots. The side from Vitoria, meanwhile, have won three consecutive games and will want to maintain this fine run.

Sporting coach Abelardo Fernández said Alavés "are a very good team. They are an intense team, just like ours". His opposite number Alberto López meanwhile said of Sporting: "They are a very good outfit. We will have to run a lot, defend well and try to impose our style of play on them."

Currently in seventh place in the table, Ponferradina are banging on the door of the play-offs. The team from Castille and León won their last match away from home and will want to take all three points again, this time against struggling Osasuna, so they can keep climbing the table. The Navarrans meanwhile are in the relegation zone and will do everything they can to climb up the table.

Their coach José Manuel Mateo is well aware of the importance of this game.
"We have a game coming up in which we have an opportunity to win and that's what I hope we'll do," he said. His opposite number José Manuel Mateo meanwhile said: "This is a very important game against a side that are in real trouble."

Las Palmas travel to Brugos as they fight to hold onto second place, a position that would grant the Canary Islanders automatic promotion to the Liga BBVA. Facing them are Miranda de Ebro's charges who currently sit 14th in the division with 40 points, and who will be continuing to try and wrap up safety in the championship.

Paco Herrera has named an 18-man squad, however, he will be without the injured Nauzet Alemán as well as Hernán Santana, who has to serve a one-match ban for an accumulation of bookings. Meanwhile, Borja Docal and Emilio Sánchez are unavailable for Carlos Terrazas, but Igor Martínez and Daniel Provencio make their way back into the team after recovering from injuries.

The Castilla-La Mancha team have collected six of the last nine points up for grabs and will be looking to pick up a further three to climb out of 17th place and into a more comfortable position. Recreativo will be approaching this match with a similar objective, albeit from a lower starting point: 20th.

The Albacete boss, Luis Cesar Sampedro, considers this a "very important" game and only has his sights set on winning: "We are up against a very good side and this match will bear no resemblance to the fixture at the beginning of the season"

The Galicians, who currently lay in mid-table, travel to Santander to take on 19th placed Racing. This promises to be a tense encounter between two direct rivals that are both in search of all three points: in Racing's case to escape the danger zone, while in Lugo’s to consolidate safety in the division.

Javier Pinillos, boosted by the Cantabrians' recent win, is ready for another meeting against "possibly the best footballing side in the division". Meanwhile, Enrique Setién, who has strong ties with Racing, predicted a "tough game" and emphasised that "whatever the result, there are still twenty-four points left to play for and plenty of time to shore up safety in the league".