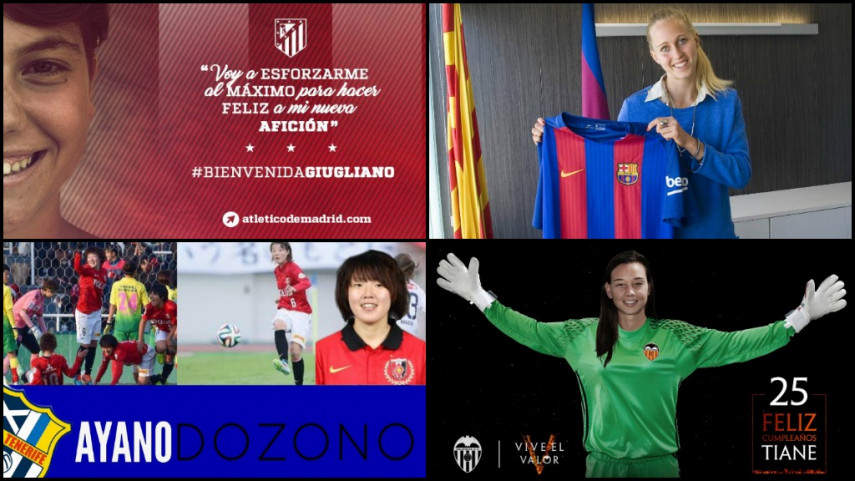 The Women's First Division is the place to be

Hailing from Chile, France, Japan, Denmark and Brazil, in recent weeks a whole host of players from all over the globe have put pen to paper on deals at Spanish clubs.

There can be little doubt that the Spanish women's game is in vogue right now. The Women's First Division has gained admirers across the planet and we're now beginning to see the results of this global appeal. There was a period when Spain was traditionally considered as an exporter of talent, with Irene Paredes's move to PSG or Ajax's signing of 'Willy' evidence of this tendency. However, we're now witnessing a trend for international players looking to move to Spain as they seek to further their careers. Since the end of last season, several Women's First Division clubs have delved into the international transfer market to secure the services of players from the four corners of the world, be they from Denmark, Romania, France, Japan, the Ukraine, Chile, Brazil or Italy. In view of the sheer volume of imports seen this summer, the Spanish top flight would certainly seem to have its pulling power.

This Wednesday saw Atletico Madrid Women announce Manuela Giugliano as their sixth summer signing. The 18-year-old joins the Rojiblancas from ASD Mozzanica and in spite of her tender years, she's a player who can already lay claim to being a full Italian international. Speaking at her unveiling, Manuela revealed exactly what supporters can expect of her:"I like to be creative and do things that nobody expects."

The Italian is however not the only foreign import to have been brought in by Atletico, after Romanian shotstopper, Andreea Paraluta sealed her move to the Spanish capital from A.S.A Targu Mures earlier on this month.

FC Barcelona Women were the first to make inroads into the international transfer market this summer, with the Catalans greeting the signing of Andressa Alves with no shortage of fanfare. Lured from French outfit Montpellier HSC, the 23-year-old forward, whose game revolves around her fine technical ability and lightning pace, chalked up eight goals last term in the French top flight. If anyone can vouch for her talents then it's Spain goalkeeper Ainhoa Tirapu, after Alves was on target when the two sides met at the 2015 Women's World Cup in Canada.

Fresh on the heels of the Alves signing, Danish international Line Roddik was next through the door at Barça. The 28-year-old centre-half, who has 104 international caps and 13 goals to her name, comes with a fine pedigree after having lifted theWomen's Champions League title with Olympique Lyon last season. Speaking about this new chapter in her career, a delighted Roddik enthused "I'm really happy. Barcelona is a fantastic club and being here gives me a really special feeling, it's a dream come true."

More new foreign blood was on its way into the Women's First Division as Luana Spindler touched down in Tenerife to becomeUDGranadilla Egatesa's marquee signing of the summer on Monday. The Brazilian checks in after having bagged a brace in last season's Copa Libertadores showpiece which saw her Francana side claim glory. Upon her arrival in the Canary Islands, Spindler was quick to reveal her ambitions for the season ahead: "I hope to repay the faith that has been shown in me with goals, high-tempo performances and real enthusiasm every time I'm given the opportunity to play."

The Spanish women's game has also captured the imagination in Japan. Last term Maya Yamamoto and Minori Chiba represented the Asian Country at Valencia CF Women and T.Alcaine ZGZ respectively and this time round, Hitomi will turn out for Santa Teresa CD, whilst Ayano Dozono - another one of the new recruits at Granadilla Egatesa - will fly the flag for Japan in the Women's First Division.

Elsewhere, there's been no let-up in the Brazilian signings after Sporting Huelva announced that they had completed deals to bring in Juliete and Patricia Sochor from Sao Jose dos Campos and Ferroviaria Araraquara respectively. After capturing the signing of the Brazilian duo, the Andalusian outfit made a further foray into the transfer market to bring Ukrainian midfielder Vira Diatel to the club.

The latest addition to this lengthy list of foreign imports is Valentina Lefort Quezada after the Chilean joined Real Betis to become their third summer recruit ahead of the Andalusians' first-ever top-flight campaign. Meanwhile her compatriot, Tiane, will take her place between the sticks at Valencia Women.

There's now just one month to go before the big kick-off and so far this summer a total of 13 foreign imports have signed for top-flight clubs in what represents an unprecedented novelty for the Spanish game.

Keep up to date with all of the latest news on the transfer dealings in the Women's First Division here.